A perennial favourite of audiophiles and possibly Quebec’s worst-kept secret, the Festival de musique émergente (FME) in Abitibi-Témiscamingue went off without a hitch in 2022. Artists and audiences were finally reunited and both halves did their best to join FME in celebrating 20 years of encouraging cultural exchange and promoting an impressive array of musical talents.

The Festival’s main stage, Scène Vidéotron, was a buzzing hive of activity on opening night as local and imported fans converged on the streets of the Rouyn-Noranda to partake of the well-illuminated playground of food, drink and musical excess. Disco pop blared against the darkening sky as Les Hay Babies wooed attendees with eccentric Acadian guitar romps. Their tight harmonics and easy melodies echoed through the Ville, drawing in listeners and filling the night with the sounds of New Brunswick on the rocks – with a twist of country-western for added extra flare!

Aperol spritzes fizzed and grilled sausages steamed as we made our way to the infamous Diable Rond, a well-chalked pool hall with a veteran staff that knows how to handle a capacity crowd. The lo-fi venue with amazing sound was transformed into a voyageur’s camp where 18th and 19th century French Canadians whirled and reeled to the fiddle and drum of Johnny Pilgrim’s authentic log-drivers waltz.

The evening does a complete about face when you wind up sharing a transport van with the larger-than-life Connaisseur Ticaso and his entourage. Pushing social distancing to the back of the room, the preeminent Montréal rapper closed out the night with a slamming lakeside smoke show at Guinguette chez Edmund that confirmed Le Connaisseur’s return to the ranks of hip hop royalty.

What better way to launch the day than by plunging into a pool party with Lisa LeBlanc? Surprisingly bright-eyed after being the headlining act the previous evening, Madame LeBlanc looked most fetching as she and her band performed lively grooves from her latest album, Chiac Disco. Clad in a sequenced diner-waitress uniform and plucking the strings alongside her bathrobed husband, she was the ideal centrepiece for a bourbon-lemonade-fuelled backyard soiree.

Party guests didn’t get far before the sonic tsunami of Medicine Singers drew them deeper into the unexplored territory of FME’s secret ‘cache’ shows. Carried across the azure waters of Lake Osisko by a hot and persistent breeze, the vibrant waves generated by Yonatan Gat (Monotonix) and his Indigenous co-creators wove a hypnotic spell. Improvisational guitar riffs overarched a foundation of traditional singing and drumming as onlookers sprawled on the grass and breastfed babies under a giant mural of Louis Riel throwing the heavy metal goat hand sign while smoking a cigarette. Formidable!

The mid-size location that dreams are made of Scène Hydro-Québec Petit Théâtre du Vieux Noranda provided an ideal setting to absorb a trio of bands that took full advantage of the spacious stage and excellent ballroom-like acoustics. Snowboarder/Dungeon Master/neo-folk troubadour Gus Englehorn and his partner/bandmate/percussionist, Estée Preda, put a lump in everyone’s throat with their humble yet dreamy tracks and nerdy banter.

This quirky reverie was short lived however as rock tigress Tamar Aphek shook the rafters with her sinfully stylish art-punk flourishes. Creating a visual vortex of red, black and white textures, the Egyptian Aphek dazzled with an array of slick neo-jazz-metal anthems. Poised to claim the festival’s theme unicorn as her animal totem, the razor-sharp singer/guitarist’s edginess prodded an entire room into a flurry of interpretive movement.

Then it was time to wake up the kids for Saturday morning cartoons – on acid. Calgary’s Chad VanGaalen provided an animated and meticulously executed meal of wacky illustrations and ridiculously catchy choruses. Tangling his modern folkloric tales with the gestures of his multi-facetted bandmates – known as The Bleach Wipes, Ryan Bourne a.k.a. Sporty Jebuz (Hair Control, Ghostkeeper, Lab Coast, Sleepkit) and Chris Dadge (Lab Coast, Crystal Eyes, Alvvays, Sections), VanGaalen charmed the largely Francophone audience with gleaming intonations that required no translation. 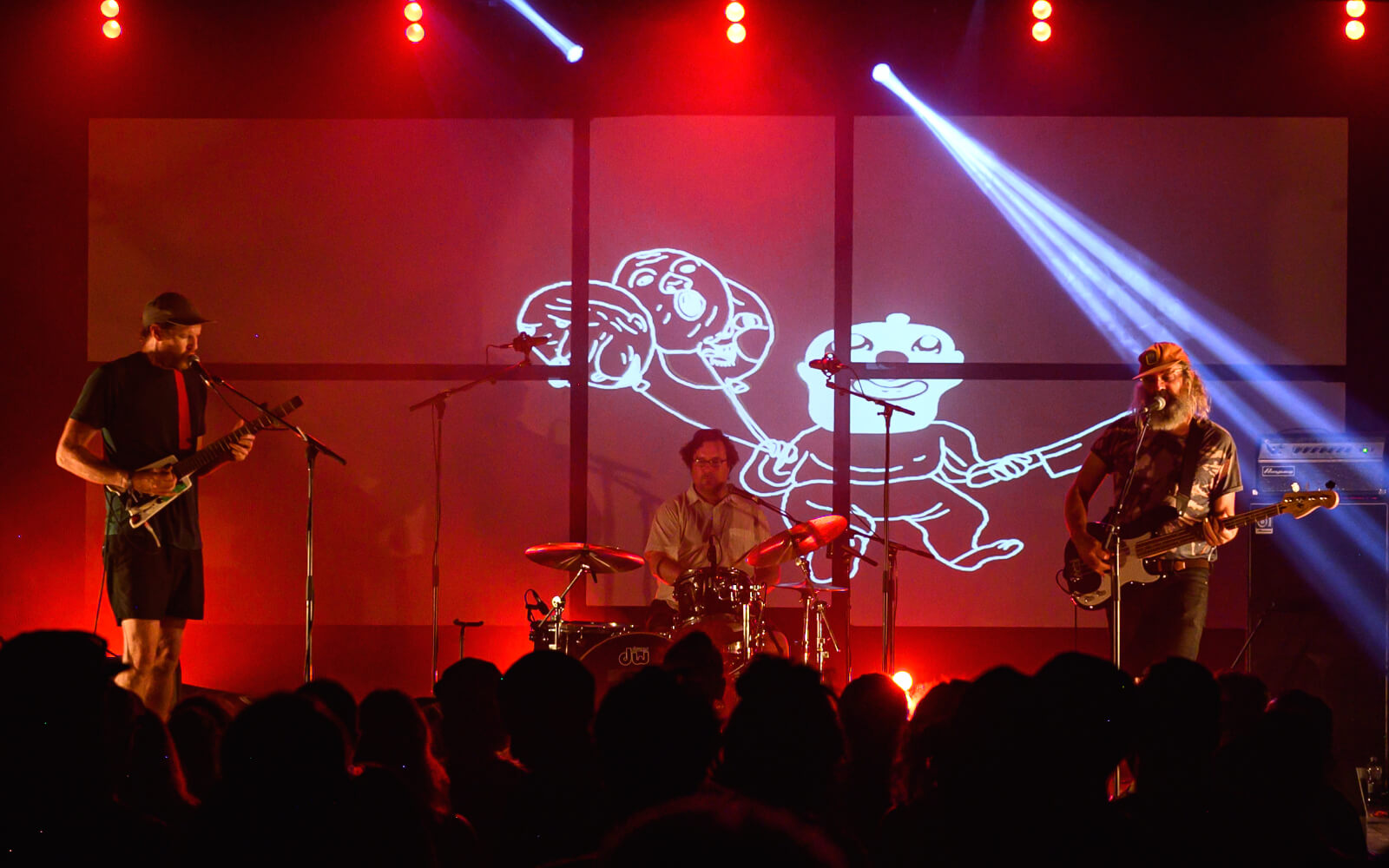 We demanded a petit-déjeuner of champignons, but canard waffles and gravlax will suffice! FME attendees broke their fast at an outdoor show that warmed bodies from the inside, as the sweet Beau Nectar featuring banana-toting chanteuse Marie-Clo and the melancholic popsters Ponteix brought their delicate homegrown songs to the grounds of the beautiful Maison d’Accueil.

There was no holding back for the ambitious note-benders of Ping Pong Go. Amped up on electronics and in the Moog for a mid-day rave, the Montréal-based instrumental project shot laser beams into the ceiling at Le QC Salle de Spectacle. Futuristic pianist Vincent Gagnon tickled the glowing bars of light like a weightless vertical keyboard. Each surging number seemed to tease at a longer Afrofunk-inspired adventure before abruptly dissolving into thin air.

Stand-up comedy and music collide whenever Les Hôtesses d’Hilaire hits the scene. Storming the beachfront stage at Guinguette, frontman/MC Serge Brideau roasted the local authorities while narrating a litany of humorous and consummately danceable crowd pleasers. His dapper blue velvet jacket was a distinct departure from the billowing monk’s cowl he’d worn at previous instalments of FME – where he ultimately stretched the fabric out to drape his robe over the heads of people in the front row. Uhhhh, pass The Bleach Wipes, S.V.P.

One of the most anticipated and simultaneously under the radar performances of the night came courtesy of Growler’s Choir (Dremeka Choir). Popping up in an alleyway between two venues the ensemble read sheet music under the direction of a reaperish conductor as they screamed, moaned, howled, spit and, yes, growled their way through a battery of terrifying hymns. Imagine the lead singers of 15 different metal bands converging to sing an unholy high mass and you’ll understand how unsuspecting bypasses were instantly converted to Satanism.

It only made sense to return to Diable Rond, the Devil’s Round. Or perhaps the realm of a rotund satyr? The road redemption was swift and merciful thanks to the psychedelic admonitions pouring from the font of colourful Montréal soulgaze outfit Solipsisme.

Last up? A post-poutine love affair with all of the rock and roll trimmings. If I said French Fu Manchu, you’d know what you were getting into, but there’s a trick to getting into Cabaret de la Dernière Chance. First – one must make like an alley cat and slip in through a gap in the back fence, not even kidding. Secondly – put in your earplugs because this is house party on steroids for band Gros Mene. Drinking, sweating and forgetting (which language you speak) was high on the menu as the stalwart rockers sent FME to bed with a solid kick in the derrière.

Late sleepers, or ‘les couche-tard’ as FME dubbed them, were out of luck if they slept on the amazing Elizabete Balčus. Dressed as an amanita muscaria mushroom, the blue-tressed Latvian flautist captivated a diverse gathering of music lovers at the Parc Botanique à Fleur d’eau. Manipulating fresh fruits and vegetables through a series of synthesizers, the neo-psychedelic Balčus confused and delighted as she gracefully painted textural audioscapes that were as breathtaking as the (super)natural surroundings.

Another breath of fresh oxygen came in the form of Ombiigizi at Le Paramount early on Sunday evening. Pronounced om-BEE-ga-ZAY and meaning ‘s/he is noisy’ the group comprises the incredible talents of Adam Sturgeon (Whoop Szo, Status/Non-Status) and coconspirator Daniel Monkman (Zoon). Paying homage to their Anishnaabe heritage, the voluminous duo embarked on an experimental journey through resonance and distortion. Sturgeon expertly directed the palpable currents of energy at will, revealing Ombiigizi’s intentions and reconciling any notion of spiritual discord with each wavering strum of their instruments.

Rounding up the sights and sensations of the past four days like the president of the high school yearbook committee, Rich Aucoin flooded the Scène Vidéotron with a glowing review. Utilizing the now infamous footage of ‘that one guy’ (Colin Wynter of Vancouver, B.C.) who got everyone on the hillside dancing during the 2009 Sasquatch Music Festival, Aucoin recapped the highlights of FME 2022 while posing some very poignant ‘right here, right now’ questions to a packed street.

Only a single box on the ol’ FME to-do-list remained unchecked. Two words. Metal. Night. The blackness that draws Quebec’s metalheads out of the wilderness and into the dominating presence of the likes of First Fragment and Abitabyss. The latter being a local act that leans into the region’s blue-collar base by wearing safety vests and mining helmets while their lead vocalist stalks the floor barking orders into a walkie-talkie microphone. Two severed thumbs up!

The icing, or fondant, on FME’s 20th birthday cake came courtesy of Dying Fetus. It’s no simple feat to close out a faire la fête of this magnitude, but the death wheelers from Maryland didn’t hesitate to lay it on nice and thick. Stirring up a whiplash-inducing mosh pit that always ran counter-clockwise, singer/guitarist John Gallagher shone with admiration for a town that has always embraced them with three-quarter-sleeved arms.

Dipping into the basement the word émergente hung in the air along with the mist of three hundred metal marathoners, the evening’s performances and indeed the entire festival’s denouement arrived with the disruptive transmissions of upstart punks No Wave. The official guide said they met in high school. Indeed, they will again when the bell rings tomorrow morning. As for the rest of us, we know for whom the chapel bells of Rouyn-Noranda are tolling and it’s not just because it’s any other Sunday in Quebec.

If attending FME for the first time is a baptism by fire, then returning to FME is a sacrament. Amen, mes amies. Amen. 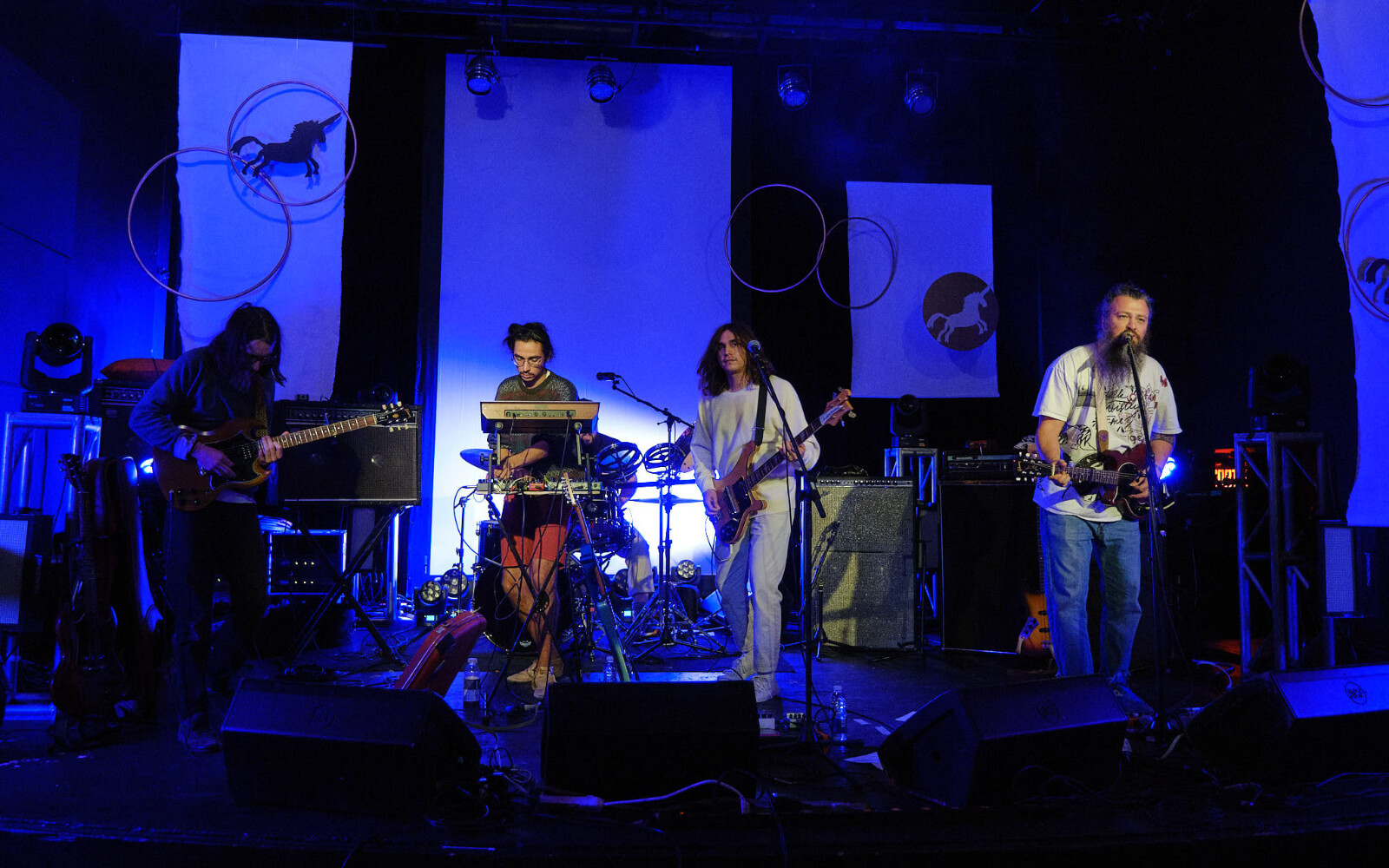