The 2022 Oscars ceremony is now safely in the rearview mirror after leaving everyone looking like a deer in the headlights. With Ariana DeBose (the first queer woman of colour to win) taking home Best Supporting Actress, Troy Kotsur (the first deaf man to win) grabbing Best Supporting Actor, and Jane Campion becoming the third women to ever win the Best Director category, there was plenty to celebrate. And that’s all that happened at this year’s Academy Awards. There is nothing else noteworthy to mention. Nothing crazy overshadowed the whole night. That’s it. So now, let’s get into some new movies that are ready to have your hungry eyes feast on them like the carcass of the ritually sacrificed water buffalo in Apocalypse Now.

In this column I’ll be sharing trailers for upcoming movies that I think might be worth seeing. Are the movies Oscar worthy? I can’t make any promises, because I haven’t seen them. This column is about TRAILERS.

The icon Nicholas Cage has decided to give himself the biggest acting challenge of his life: playing himself. In this action comedy Cage’s heightened version of himself is down on his luck and struggling in the film industry. Out of options he accepts one million dollars to attend a super-fan’s birthday party. They seem to hit it off, go cliff jumping and take a fast car ride while laughing. That is until CIA operatives Tiffany Haddish and Ike Barinholtz break up the friendship and ask Cage to help them take down his new dangerous bestie. With lots of car chases, guns, jokes and Nick Cage being Nick Cage, this movie is guaranteed to be more fun than a YouTube super cut of Nick Cage.

Ride Till I Die (Documentary)

This documentary follows three bull riders doing what they do best: trying to hold onto the back of a raging bull for as long as they can, getting thrown off, injured and talking about why they love it. The trailer sells this doc hard. The first quote heard is, “I truly believe it is the most dangerous sport.” Go on…”When you say Ricky Ringer in the bull riding world everyone knows who that is.” Well I don’t know who that is and now I want to! Cue clip after clip of cowboys getting pulverized by bulls, cartwheeled into the air like one of those seals caught in the jaws of a killer whale, inspirational music and three good old boys talking about determination, and riding till they die or become crippled, and you’ve got a film that begs to be seen. If not only to shake one’s head and ask, “But why?”

You Won’t Be Alone (Folk Horror)

Fans of folk horror get ready to tighten your bonnets, stock the fire, and slaughter a goat, because the next great witch movie based in the 19th century has arrived. From the looks of this trailer, a young woman who has spent some time in the woods hanging out with a demon, stumbles upon a village full of peasants who are not very happy to see her huge claw nails. In time she seduces some men and gets a taste for their blood. There is also a cave. It might sound like I’m not actually excited to see this movie, but I am. With critic pull quotes strewn all through this trailer and spine tingling whispered dialogue in Macedonian saying “Me the witch…thirsts…for every him” how could I not want to get creeped out by this.

Judd Apatow is back with a comedy that looks to be wildly absurd and stacked to the sanitizer bottle brim with comedic talent. After his last three features that were heavy on the dramedy I could not be more happy to see this side of Apatow again. Taking a page out of the Tropic Thunder script, where the movie follows the production of an over-the-top action adventure film, in this case Cliff Beasts 6, and mixing in the filmmaking nightmare that was the Covid-19 lockdown with all of its new rules, regulations, and deep nasal swabs, this film’s release could be timed perfectly. By the looks of this trailer there is going to be plenty of green screen CGI jokes, behind the scenes actors on drugs, and Fred Armisen. And let’s be honest, we can all use more Fred Armisen in our lives. My only question is, will the pandemic jokes get a roaring round of pots and pans being banged, or will they quickly become congested and need to be quarantined? Well I think we just answered that question.

In this Iranian feature debut from Panah Panahi, a family of four embark on a road trip, but to where and for what reason is unclear. The middle-aged parents seem to be teaching their older son to drive and speak of him getting married, while keeping certain details about their trip secret from their joy-filled, smart-mouthed six year old boy. Run-ins with bicyclists, tiny dogs tied to plastic chairs and masked men set us up for all the random adventures that road trip movies bring with them, and critic quotes like “Phenomenal!”, “Stunningly assured”, and “Lovable” tease at a heartfelt masterpiece in disguise. I just want to know where they’re all going!

When a deaf woman stumbles upon a victim slowly dying in an alley, she becomes the killer’s new prey as he hunts her through the streets of South Korea. Starring Squid Game’s Wi Ha-Jun as a serial killer terrorizing the city, this movie has a lot going for it. Korea has a history of making incredible thrillers and putting a familiar face in the role of a serial killer is most often a great move. All of a sudden someone you feel like you know is playing a psychopath which is very unnerving. Think Tom Cruise in Collateral. Add to this the hunted being deaf and the introduction of a visual sound level metre in the first ten seconds of the trailer and you know the tension is going to be thick enough to cut with a blood-covered axe. (Watch HUSH as a good example)

Richard Linklater returns to an animation style he introduced with Waking Life and A Scanner Darkly, this time to tell a coming of age story of a kid who is asked to become an astronaut in Houston during the 1960s. The trailer reminds us just how realistic but somehow fanciful this animation style can be, while opening a window into the charm of growing up in a simpler time where kids could leave their bikes on the lawn, and everyone watched black and white programs on a tiny and very thick television together. The plot is ridiculous and fantastical, and the sense of humour is just right. I think it’s going to be a really nice escape pod for our brains.

Sam Roberts Band presents “All Of Us” (Documentary)

When the pandemic first hit and the world was drop kicked into an unprecedented lock down Sam Roberts Band was in the middle of recording their seventh studio album. Rather than call it quits, put things on hold and burn all their guitars, they decided to shut themselves in a remote studio North of Montreal, hunker down and let the situation at hand steer their creative process. Cameras were rolling to capture the experience and now it’s on Crave for everyone to watch. With a trailer that doesn’t give away much other than some live recording footage and interviews in a very snowy outdoor setting, my main questions are which band member brought in the first sourdough starter? And did they go full Lord of the Flies on each other? Or should I say Yellowjackets on each other?

Fresh off her previous role as an exotic dancer in 1996’s Striptease, Demi Moore comes back with a pair of tight-laced steel-toed boots and a freshly shaved head to star in Ridley Scott’s attempt at a feminist story about one women trying to break down the walls of sexism and toxic masculinity in the Navy Seals. It’s not a fantastic film, and misses the mark when trying to make its point, but it does have some pretty decent action sequences, and honestly, the only reason I’m including it is because I heard there might be a sequel coming out soon. I forget where I heard that…oh right, it was while watching the Oscars. 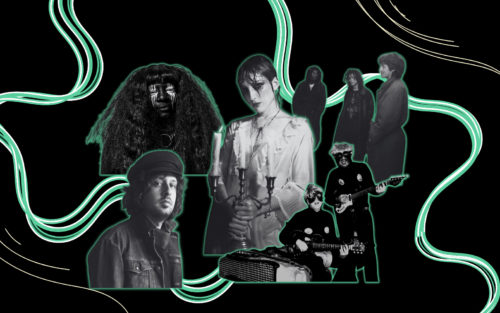