On the heels of her stunning debut, the rising Korean-Canadian songwriter shares her musical journey from pre-TikTok to the stage.

Hannah Bussiere Kim is buzzing with the thrill of her recent Trader Joe’s trip. The Toronto songwriter professionally known as Luna Li is resting in her hotel room in Philadelphia, where she’s just stocked up on enough butter cups, popcorn, and dried mangos to get her through her debut North American tour. Though you may know her from her active and successful TikTok presence, Li’s IRL talent has been steadily eclipsing her enchanting video snippets that originally put her in the limelight. There’s a special magic to watching the multi-instrumentalist at work. It was special for Li, too, to kick off her headlining tour with sold-out shows in Brooklyn and Philly where fans could be seen actively mouthing along with every word. It’s the first time she’s felt an audience was really there for her.

A series of viral TikTok jam sessions certainly had their hand in propelling her into the spotlight, but Li is not exactly an overnight sensation. Her debut album, Duality, is now one month old, but her musical chops have been a lifetime in the making. Li was raised by a very musical mother, who played the piano and taught classes for toddlers. “I grew up around her playing music in the house all the time,” says Li. When she was five years old, Li asked to take piano lessons. She started learning the violin when she was eight. Then, Li’s mom joined her partner in running a music school in Toronto when Li was nine or 10. “I was able to access this whole community of students and teachers, and try out different kinds of lessons, and perform at recitals,” says Li. “Music was my whole world as a kid, and it continues to be now.”

While her mom influenced her music-making, Li’s dad shaped her listening. She was raised on a healthy diet of 70s and 80s hits, and her dad would play a game with her and her siblings where whoever could shout out the name of the Beatles song playing in the car the fastest won. “He played lots of Beatles, Queen, and David Bowie,” says Li. And as she got older, she grew to love modern artists like Tame Impala, Melody’s Echo Chamber, and Mild High Club. 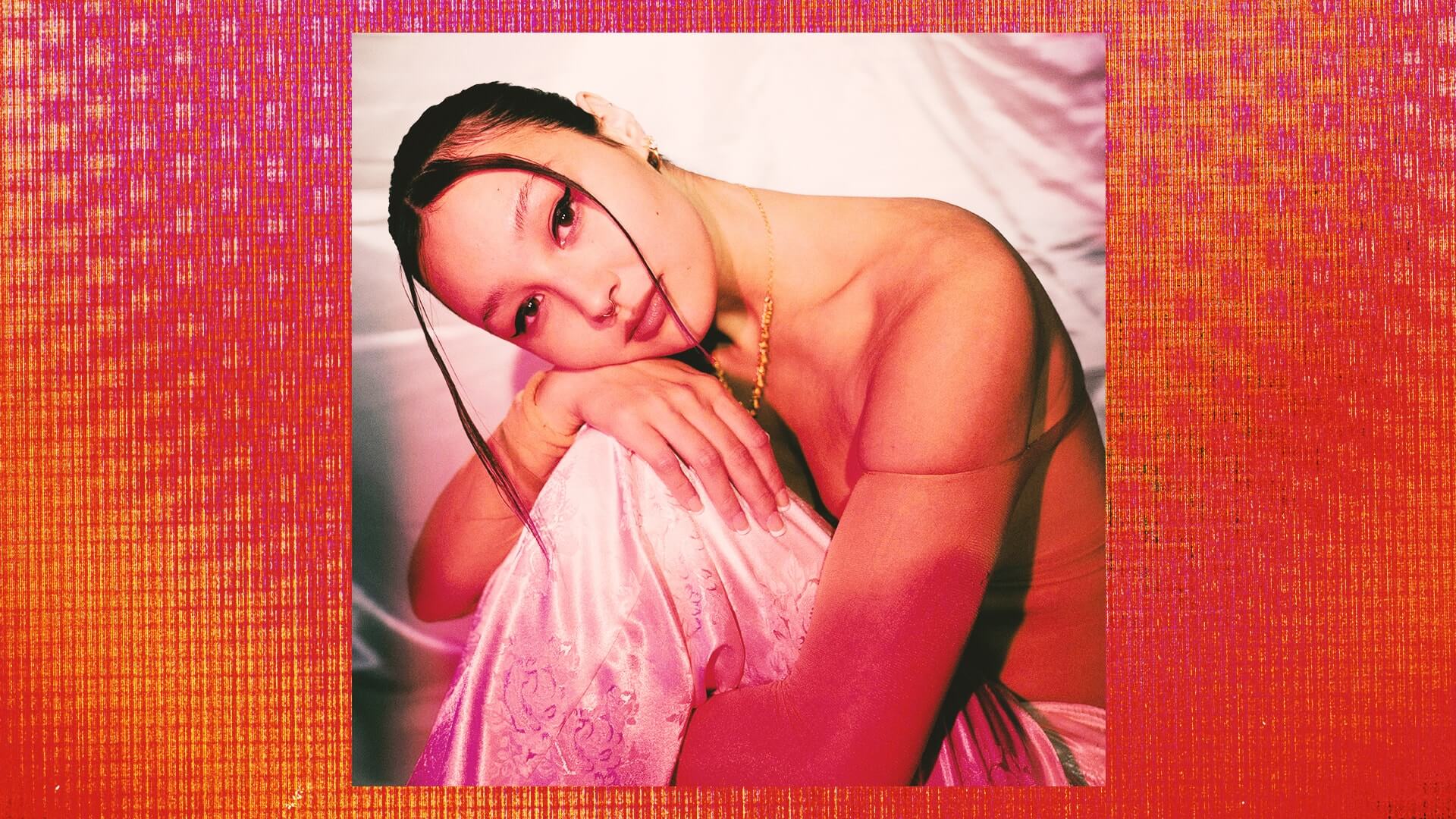 After graduating high school, Li moved away to study violin at McGill. Giving it an honest shot, she simply couldn’t see a future for herself within the rigid career paths university life was prescribing for her. Back at home in Toronto for the winter break, she told her parents how she was feeling. “They were like, ‘Well, if you’re not that happy with it, it’s a huge investment to be paying for university. Maybe you should take some time off and think of what you want to do,” says Li. “Having that advice was huge for me.” So she dropped out.

Li moved back home and brought her classically trained talents to dreamy new heights, playing shows in and around Toronto leading up to the release of Opal Angel, her 2017 EP. When I caught her at Pressed, a beloved cafe in Ottawa, circa 2018, she cast a spell on the crowd when she brought out her violin, glitter streaked under her eyes. It was only a matter of time before the world caught on to her star power. Sure enough, the demand for Li’s viral TikToks in 2020 spurred the release of her jams EP in 2021, and everything began falling into place. “I get a lot of messages saying ‘I’ve been following you ever since you started – when you went viral and stuff.’ It’s funny to hear that because people kind of have this notion that they have been there from the start,” says Li. “I really don’t mind if people have that impression of it, but I do like to acknowledge for myself that I’ve put many years of work into this.”

The record’s title and theme also emerged over time, as Li looked back and traced a distinct thread through the songs she’d accumulated over the years while creating it. As a Korean-Canadian who sings about being “alone, but not lonely” while weaving classical instruments brilliantly into heartfelt bedroom pop, Duality perfectly encapsulates the twin themes at play in her work and life. The album is an ethereal mix of synthesizers and keyboards, with heartstring-pulling violin appearances and blissful bits of harp. Li especially loves to play tracks with earworm guitar riffs – like “Cherry Pit” – on stage. Duality felt most real, however, when she visited her favourite Toronto record store. “One of the most incredible moments was getting to walk into Sonic Boom and see that they had a little Luna Li section on their shelf,” says Li. “As a teenager, I would line up there for Record Store Day. And I always stopped in whenever I was passing by.”

Li’s newfound virality helped catch the attention of Japanese Breakfast, who invited her on their 2021 tour. Lead singer Michelle Zauner is also half-Korean, and Li was thrilled to be opening for one of her idols. It was the first time Li had gone on a full blown tour and played multiple nights in a row, as opposed to weekend or week-long runs. Li was thrilled, but nervous. It was the true test to see if she could handle life on the road. “It ended up turning out really well,” says Li. “I loved being on the road. My band was just so great, and the Japanese Breakfast team was so lovely. We learned so much from that first tour that we’re definitely taking into this one.”

“I really wanted to make that an important point of the show and of the project in general – to work with and uplift other women, especially Asian women and women of colour.”

Zauner’s invitation for Li to open on her 2021 tour came from a long line of Asian women making space for each other in the world of indie music. Mitski had done it for Zauner in 2016, now she’s done it for Li, and Li stresses how important it is for her to do the same for the next person. At her first show in Brooklyn, Li invited local artist Jane Lai to open. “It was important to me to try and seek out another Asian woman to be a part of the show,” Li says. Duality features songs with Jay Som, beabadoobee (who Li is touring with later this year), and Dreamer Isioma. “When I started the project for Luna Li, I really wanted to make that an important point of the show and of the project in general – to work with and uplift other women, especially Asian women and women of colour.”

It’s one way Li is shaping her shows to encourage more diversity, in contrast to the very white, narrow Toronto scene she knew. Another is the way she’s incorporated her childhood instruments into her project. After moving home from university, Li put down her violin to join Toronto’s DIY scene. As time went on, she kept longing for a way to bring it back into her practice but feared it would turn her dreamy sound folksy. She finally hooked up a loop pedal to her violin and found her secret sauce. Now, the angelic sounds of the violin and harp are what help distinguish Li in a sea of bedroom pop. She’s even bringing her harp on the road for the first time on this tour. “Music feels more like an art form than it ever did before. I always had such a personal connection with music, and I don’t think that deep connection ever shifted or changed, but it’s a different thing to be writing your own music,” says Li. “It feels like a real evolution of what I started as a kid.”

Onstage in Brooklyn at her first headlining show, Li is in her element. She floats effortlessly between instruments, including a butterfly-shaped guitar, beaming the whole way through. A fresh tattoo marks her upper arm. It’s a black-and-white butterfly with a gentle trail of flames. As she strums the intro to ‘Flower (In Bloom),’ her eyes sparkle, softly singing, ‘Thoughts are loud in the night/so I imagine taking flight.’ “It’s my first tattoo, and a visual representation of those words,” says Li. “I feel like I’m really taking off for the first time.”