For the first time in nearly three years, tens of thousands of people were back tripping over the tree roots of the lush Parc Jean Drapeau for Osheaga. The music festival on the little island in the river at the foot of downtown Montreal was once again screaming loud enough for the city to hear. The fest didn’t happen in 2020, and a scaled-down version in 2021 just wasn’t the same, but 2022 pulsed with all the energy of the Osheagas we love and remember. It was sprawling, full of Franglais, joyous – but this time, it belonged to Gen Z.

Not only did TikTok have a massive booth complete with a ring light where you could film yourself doing viral dances, but TikTok viral music dominated the lineup. You might not have noticed it at first glance, but you’d definitely pick up on snippets from the sets of PinkPantheress, Ashnikko, The Kid LAROI, girl in red, Glass Animals, and Ashe. Even if you’re not on TikTok, you’d notice the way the crowd lit up at certain songs. Even the headliners ballooned bigger during the pandemic partially thanks to the app, like Dua Lipa (aka Dula Peep) and Future, and others on the big stage like Machine Gun Kelly. Glittery, gem-studded eye makeup perfected during quarantined binge-watches of Euphoria was rampant. Hey, even Dominic Fike was there. 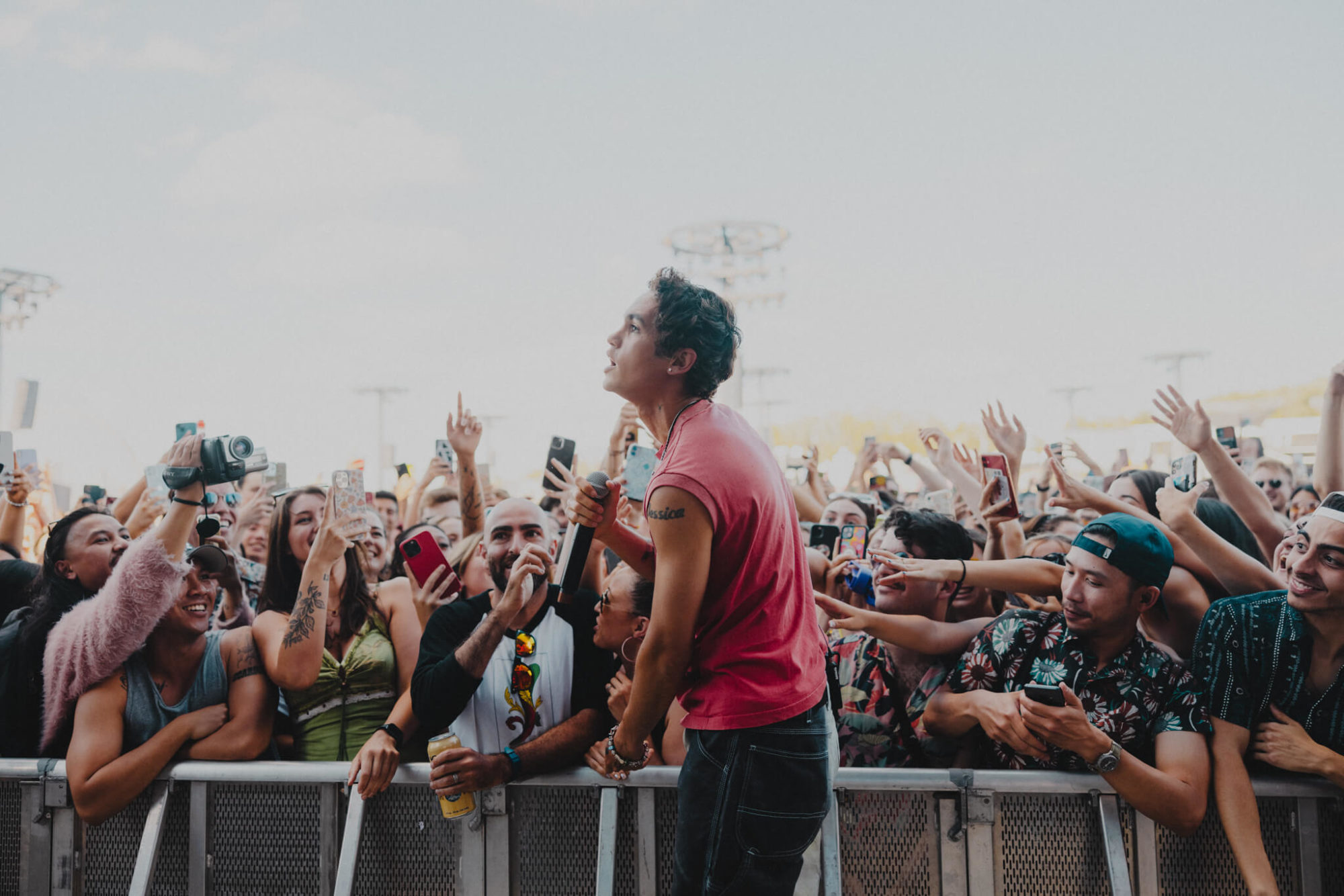 The fest sprinkled in some millennial indie mainstays like Arcade Fire and the Yeah Yeah Yeahs, and some Quebecois favourites like Pierre Kwenders, Safia Nolin, Skiifall, and Men I Trust. But if you were hoping to relive a pre-pandemic 2010s Osheaga, this year was bound to make you feel a little old – if just for a second. Any reservations melted away with the feeling of dancing with a big crowd of people again, belting out your favourite song or bouncing your way to a new favourite. There was a palpable feeling that we were all savouring it more than ever before.

As I beeline my way to the grounds on the sunny first afternoon, the mellow riffs of Gus Dapperton welcome me in from one of the main stages. I stay for a second to ease my way in with the gentle crowd and vibey set. I head over to catch Lolo Zouai on the Green stage, a little bit of a trek over to a leafier part of the island where the river and the Montreal skyline peek through. She’s a ton of fun and showed off a bit of her impeccable French in between songs.

Although she’d pretty much lost her voice, PinkPantheress’s cheery British charm made for a bubbly set. The crowd was happy to help give her vocals a boost, especially on the earworm tracks like “Just For Me.” It was a shame that we couldn’t hear and see more of her voice come through though, since we’re already so used to seeing her songs come out of lip-synced mouths on TikTok. If anything, it just made me want to see her again soon.

Beep beep! Charli XCX’s set the energetic high of the day, bar none. Although we couldn’t snap anything, let me paint a picture: so much jumping. Lots of ass-shaking. A bedazzled red two piece set to kick around in. Grecian columns in the back, impeccable dancers mirroring her moves. She dedicated her banger “Boys” to “all the gay boys in the crowd,” and everyone went wild.

The second Karen O emerged in a horned helmet and heavy fringe, the teenage boy next to me whispered to his friend “Woah, what have we gotten ourselves into…” An absolute treat, kid! The Yeah Yeah Yeahs were electric, powered by a frontwoman clearly re-energized, revved and ready for the first album in nearly a decade. She was undeterred by the relentless, obnoxious chants of “HEADS WILL ROLL!” after every song – even after she assured the crowd it was coming. I almost wished she’d held it back out of spite. The giant inflatable eyeballs that bounced across the crowd during it were worth it though.

There’s always something special about a hometown show, and Arcade Fire milked it for all it was worth. They wisely kicked off the set with old favourites and a Montreal sensibility, with Win Butler teasing “No Cars Go” as one of the first songs they made while he was working at a sandwich shop in the Mile End. The crowd deflated a bit as they ventured past the Reflektor-era and especially into some of the material off the past two albums. Regine swooped in to revive the sleepy crowd with “Sprawl II: Mountains Beyond Mountains.” Though they ended on an uninspired closer, “Wake Up,” rain started to pour at just the right time to make it feel special.

One of the most engaged, rhythmic crowds of the festival so far. Everyone lit up from the second Sampa took the stage, and her and her band’s joy was infectious. It was special to catch her at this moment in time – on the cusp of a transformative new album and amidst a back-to-back festival run where she and her band are breaking boundaries as the first Zambian band on so many lineups. They tossed in a Fugees cover as a nod to Sampa’s reverence of Lauryn Hill, and it was total bliss. I headed to her trailer after the show for an interview about her upcoming record As Above, So Below (to come), and heard the sounds of Bleachers trickle in the background.

Another tried and true Canadian festival classic, Arkells knew what they were doing. They snuck in an Abba cover – “Gimme Gimme” – at the time when the late-afternoon drinks were hitting. Everyone’s dancing got borderline theatrical. It was a punchy pick-me-up to power us through the rest of the night. 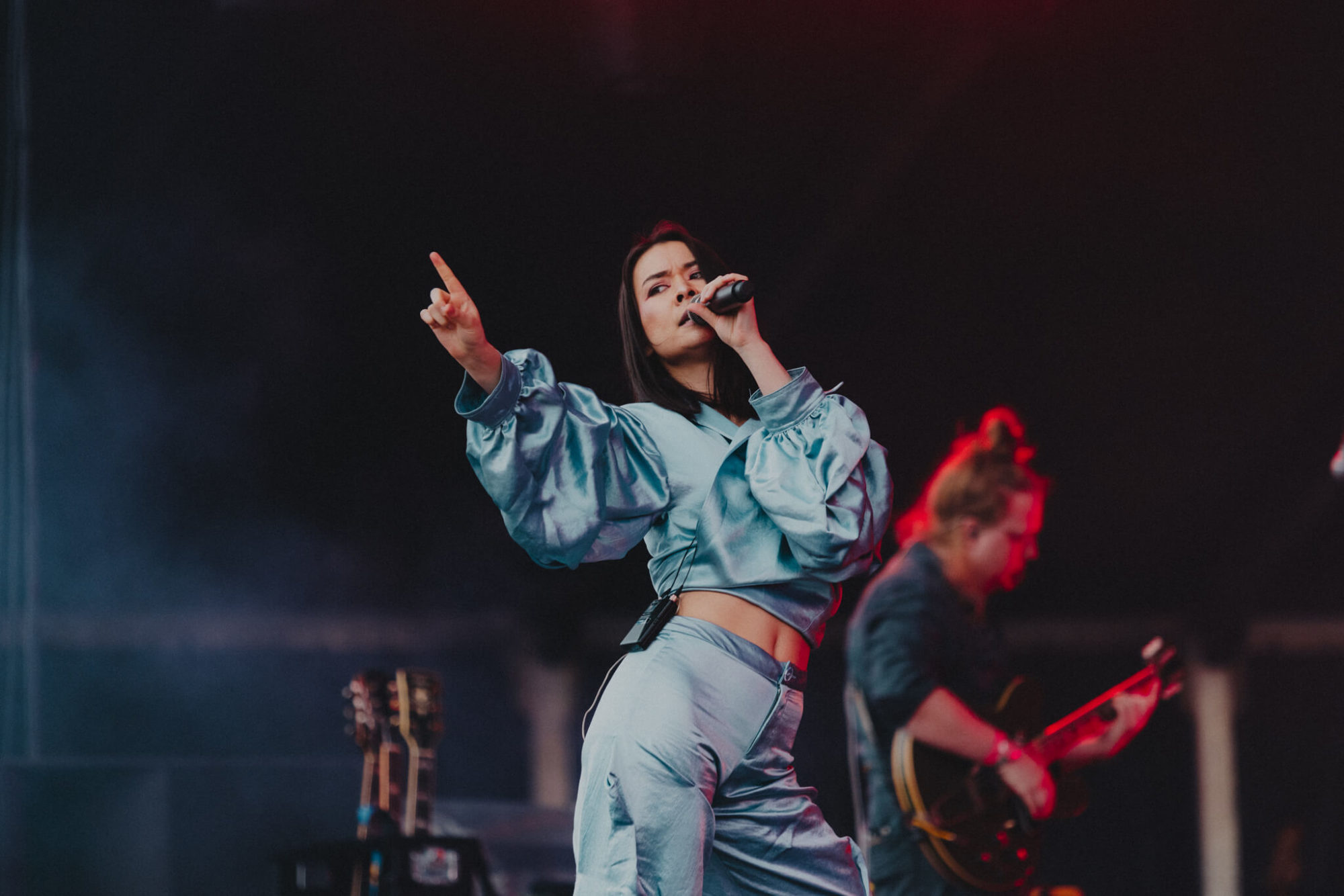 Unapologetic theatre-kid energy was a much-needed palate cleanser amidst the rest of the lineup. Mitski doesn’t bounce around. She taps her arm rhythmically, sharply draws a box in the air around her face with a single finger. She cooed out a mix of classics like “Your Best American Girl,” amidst fare of her recent Laurel Hell, but the TikTok-inclined crowd really lost it at “Me and My Husband.”

One of the most memorable and just straight up funnest sets of the whole festival. Extra props for the chaotic visuals which included a bootleg animated Remy from Ratatouille. Pure chaotic energy. They kept the autotune on for in-between song banter which just pushed it over the edge. Highlights were “Money Machine” and the star shaped cone on Dylan’s head. Good laughs, and you’re not necessarily laughing at them. Meme music.

After this, I headed over to Burna Boy for a big ol’ dance party. I stuck around for Future, got a bit annoyed by his lateness, but still caught a couple songs and felt the warmth of his pyrotechnics on my back as I headed out.

Ceréna and her dance crew were absolutely the right choice to kick off the last day. She drew a loyal crowd to the small stage closest to the water with her relentlessly optimistic dance-pop. It was the only time the whole weekend that I saw a security guard bopping along to the show. It was her first time ever being at a musical festival period, and she and her crew – who she made a point of properly introducing – killed it.

On the way to the queer-anthem-making girl in red, I caught iconic Quebecoise lesbian, Safia Nolin. The singer was in her own world as she strummed out her signature folk-pop. Seeing her followed by Lucy Dacus was a blissful break of slow ballads before the high-energy closers of the night.

It seems as though Osheaga didn’t get the memo in time that Wet Leg had blown up. The crowd spilled out of the grass of a too-small stage, but that just heightened the rockstar feeling of it all. Their synth player couldn’t make it, so the sound of the night leaned a bit more punk than usual. Rhian joked at one point that she’d been soaking the stage. It was the only set where I heard the crowd chant the band name over and over.

I hung around the same tucked-away stage to catch a small but lively crowd tear up the dance floor to the beats of the Halluci Nation as it got dark. The regalia of their opening dancer caught the spotlight beautifully as it blinked down. I soon headed over to Dua Lipa for the hype, but I could have happily stayed here to close out the night. Good vibes.

Read our interview with Wet Leg!

Osheaga ate her up. Her set was just as polished and her look just as perfect as you would expect. The crowd was clearly thrilled to have her as a closer, even though she’d just sold out Montreal’s Bell Center just a couple days earlier. The people can’t get enough of Dula Peep, clearly. She closed with a transcendent performance of “Levitating.”

I join the flood of people cramming into the island’s metro station to head home, an Osheaga tradition. We’re all headed in the same direction, with glittery, sweaty bodies crammed up against each other. As the giant stampede gets off and makes its way up the meandering hall to the connecting lines, the buskers that always capitalize on post-concert energy are there, playing one of the three songs they always play. It doesn’t matter. Everyone belts along to CCR at the top of their lungs, not wanting the music or the night to end.

The Sorels Break The Ice On “Love Your Rock ‘N Roll”

Lauren Spencer-Smith Manifests Her Way To The Top

Tackling heartbreak with an edge, the Vancouver Island pop-soul singer is breaking out in a big way with TikTok-fuelled hits.

The alt-country chanteuse takes the wheel and puts the past in the rearview mirror on new album.