Patrick Holland: After The After Hours

The funky electronic music producer is back on track revisiting pop sensibilities of his past.

Patrick Holland has been firing up crowds at some of the planet’s most illustrious dance clubs for the better part of the last decade. Under the moniker Project Pablo, he has firmly established himself as one of Canada’s finest electronic music exports, but his latest work sees him abruptly switch up his sound and bring his birth name to the forefront.

Trading disco-infused and club-oriented beats for luminous guitar-driven pop while marking his debut as a singer, his new album, You’re the Boss, might leave his longtime followers initially a little confused. But when you work with as many high-profile musicians as Holland, being exposed to different sounds helped him realize ambitions that he’d been putting off for too long.

“I’ve been wanting to properly release music like this for a while,” Holland tells RANGE from Liverpool during a night off from touring as the live bassist for Montreal indie-pop outfit TOPS. “I hadn’t written much of that sort of music in recent times when I was making dance music. But it’s something I did when I was younger. So it was a longtime dream for sure.”

Born and raised in Vancouver but based in Montreal since 2014, Holland’s journey as a musician began when his parents gifted him a drum kit at age 10, then later, on his 16th birthday, a guitar. But while studying science at the University of British Columbia, he discovered a new musical preoccupation: Vancouver’s rich underground electronic scene. Encouraged by a fellow partygoer, he began dabbling in making his own dance music.

Simultaneously, Holland’s interest in academics waned. He dropped out of UBC and spent six months catching waves and working at a campground in the surf paradise of Tofino, BC, on Vancouver Island. After getting his fill of sand and salt air, he enrolled in music studies at Simon Fraser University—before dropping out one last time to devote himself to music, on his own terms.

That devotion to his craft has since carried Holland to renowned venues like XOYO and Phonox in London, Paris’s now-shuttered Concrete, and the world’s—never mind Berlin’s—most exclusive nightclub, Berghain. Holland has released music via a constellation of Pacific Northwestern labels including Hybridity, 1080p, Normals Welcome, and Pacific Rhythm. Internationally, he’s seen releases through Magicwire, Club Lonely, Spring Theory, and Ninja Tune’s singles offshoot Technicolour. He even co-founded his own imprint, Sounds of Beaubien Ouest, with Sebastian Cowan of Arbutus Records, and is the sole proprietor of ASL Singles Club.

With such a resume, it’s no surprise that Holland’s first single from You’re The Boss, the svelte pop number “Sinister Bell,” caught the seasoned producer’s longtime fans off guard. “From 2018 onwards, the music I was listening to was outside of dance music, and that definitely inspired me to just go ahead and really dive into creating other types of music,” Holland says of his seemingly sudden stylistic pivot. With touring cancelled due to the pandemic, he also had more time to experiment. “That turned into songwriting instead of diving deeper into sound design.” At this point, Holland had also already spent years writing songs for and producing other artists. Working with names like TOPS, Mind Bath, Jacques Greene, Homeshake, and Cut Copy pushed him even further towards a poppier sound.

By the time Holland unveils new music, it’s sometimes as much as two years old. In January 2020, he had a fully demoed dance album that he planned to finish that spring. He’d also begun experimenting with vocals. But with touring off the menu, he decided to start fresh—mostly. Though he scrapped the demos, he salvaged the vocal parts as the template for You’re the Boss, which he finished recording and mixing in August 2021.

Along with the stylistic leap, You’re the Boss is momentous for Holland as his first full-length release under his given name. In January 2020, he retired the Project Pablo moniker in response to Latinx communities’ concerns of appropriation. “I still see it as I screwed up,” he says, reflecting on the decision. Bittersweet as it was, it was also fortuitous. “Any time you change an alias, it definitely feels like you’re starting new, so it was definitely freeing in removing expectation.”

Rather than mark a definitive step beyond Holland’s work as Project Pablo, however, You’re the Boss finds him coming full circle—or at least continuing on a path set by his breakthrough album, 2015’s lounge-friendly, deep-grooving I Want To Believe. “I almost see [You’re the Boss] as a followup to I Want To Believe. I feel like it is something I wanted to do back then, and I just didn’t have the tools, the resources, or the time because I was just starting to tour.”

As Holland points out, I Want To Believe resembles pop music in its instrumental verses and choruses. “Things I typically jump to when writing a melody or bass line or chords are really hard to shake. And I did my best to branch out, but a lot of my usual melodic sensibilities, which you can hear on I Want To Believe, still linger on this record. I think no matter what I do, even if the sound is completely different, there will still be a recognizable aspect in there mostly to do with the harmonic and melodic structures of it all.” 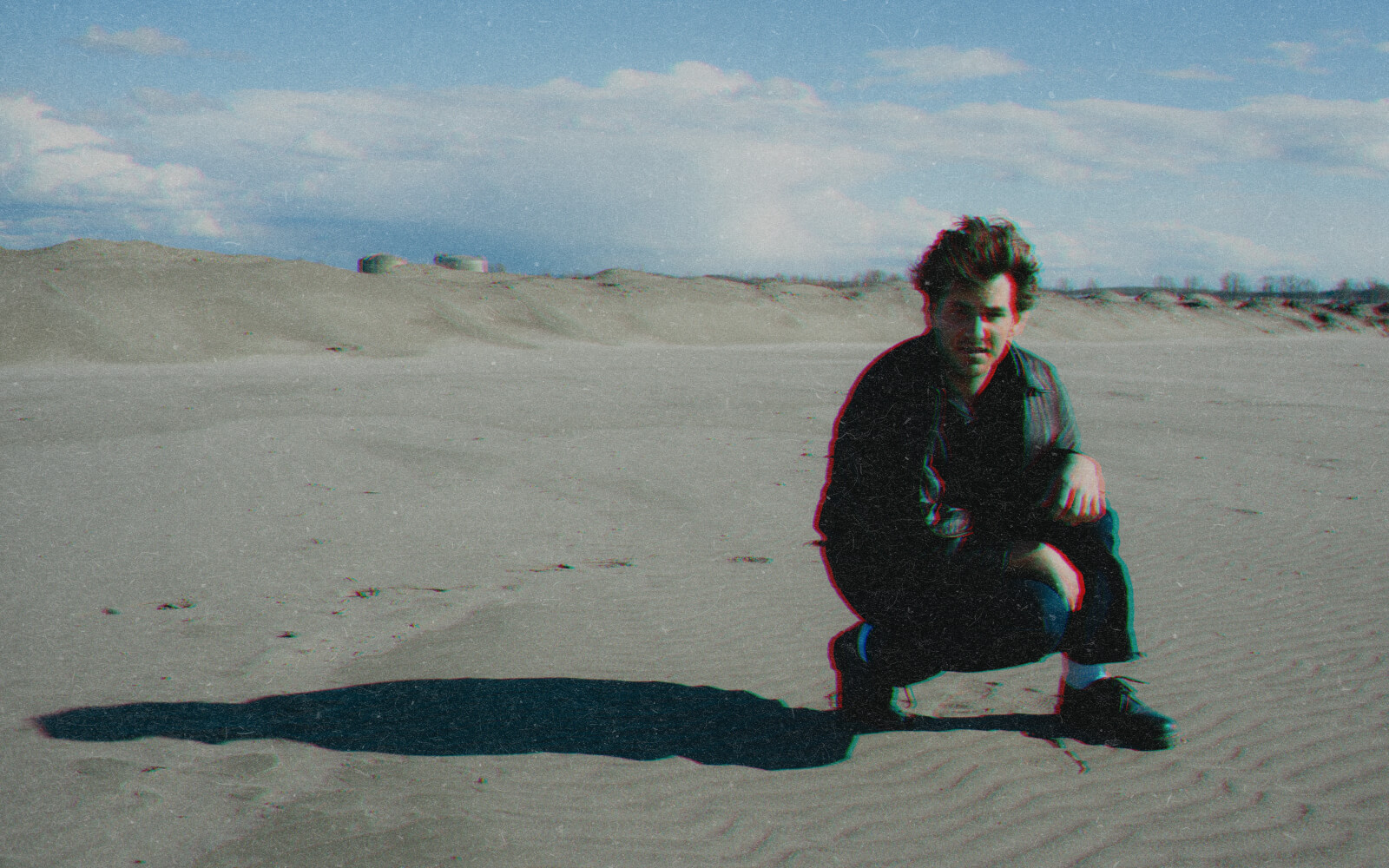 Holland’s songwriting-oriented approach on You’re the Boss was also a means for him to scratch an itch he’s had since 2015: to make music that’s more personal, not just music he wants to hear or play in a club. In penning and singing his own lyrics and playing every instrument except saxophone (Montreal jazz wizard Chris Edmondson gives the assist there), he’s firmly embedded himself in the music.

But the great irony of Holland’s pencil dive into lyricism is that growing up, he never paid much attention to lyrics. “I listen more to vocal tones or phrasing versus the actual content of the words,” he admits, praising the voices of Aldous Harding and Serge Gainsbourg. “But I am trying to unlearn that and focus more on the words and poetry of it all.” As for wordsmiths, he extols the talent of his good friend, pop maven Sean Nicholas Savage. “His lyrics are always great and have been a big inspiration over time.”

No slouch himself, Holland’s foray into lyricism skilfully invites interpretation. On “Puzzled Thought,” he sings of being on the water’s edge and “anticipating the cycle’s end.” It’s a peaceful scene, but anticipation can wreak anxiety. “I don’t like to fully reveal what [songs] are about, but what I’m talking about in those lyrics is fully the lightest, shallowest thing. It’s not supposed to be dark at all or anxiety inducing. So it’s funny that depending on how you read things, it can go one way or the other. That’s definitely what I was trying to accomplish with a lot of this stuff.”

As well, Holland seems to have a manageable grasp of his anxiety. The phrase “you’re the boss” implies relinquishing control and following one’s intuition. But doing so requires trust. “I forget where to go again / It’s hard to recall, but it’s in place,” he sings with assurance on the blissfully languorous “The Shame of It All.”

Even when inexplicable external forces stir mischief or inconveniences, like making mysterious noises or breaking equipment—phenomena that have trailed Holland for years—he’s learned to form an amicable relationship with them; he even likens them to a playful companion. “I found it funny off the bat. You have to compartmentalize the way you think about anxiety and fear.”

Holland has come a long way in his personal and artistic development, and now those facets of his life have merged in ways he’d hoped for years. “If you’d told me three years ago, I would be surprised. But in 2015, this was the direction I was seeing myself going in. But with playing a lot of clubs—I mean, my music from 2015 till 2019 was very club-driven stuff. I love making that music a lot, but I’m glad to be back on track with where my head was at back then.”