The Best Bands We Saw at Primavera LA 2022

From headliners Lorde and Arctic Monkeys to rising stars Boy Harsher and Fontaines D.C. the international fest made a strong North American debut.

Primavera Sound, a music festival celebrated in Barcelona, Madrid, Porto, Santiago, Bueno Aires, São Paulo, and Benidorm, finally landed in Los Angeles September 16 to 18 after a two-year delay due to the pandemic.

Taking place in Chinatown’s LA State Historic Park, its debut saw headlining performances from artists including Lorde, Nine Inch Nails, and Arctic Monkeys. With more than 50,000 people in attendance, LA celebrated all that is beautiful within the independent music community and beyond. The three-day music festival served a little bit of something for everyone with their unique and diverse line-up. From performances by Divino Niño, Kim Gordon, Shygirl, Stereolab, Special Interest, Surf Curse, King Krule, to Bicep, festivalgoers were guaranteed to find something they liked while discovering new bands to adore.

Primavera LA was initially planned as a 21+ event, but rumours soon floated that headliners Arctic Monkeys would not perform unless it was an 18+ event. The festival’s way around it? Putting up fencing around stage areas with security to ensure alcohol stayed in restricted 21+ areas. This meant anyone with a drink couldn’t move to another stage until their drink was finished and disposed of. And for the underage fans, this meant they were restricted to very small spaces with undesirable view points. It was heartbreaking to see young fans lose the chance to see someone like Arctic Monkeys’ Alex Turner close up, but the measures Primavera took to ensure everyone had a safe and fun time were understandable.

Without a doubt Lorde, Nine Inch Nails, and Arctic Monkeys were the stand-out acts of the festival. You could feel the crowd’s pent up energy and emotions shining through as soon as each act walked onto the main stage. The energy was so overwhelming, Girl In Red continuously poked fun at the fact it was obvious who everyone was there to see. But the weekend also saw standout performances by Kim Gordon, Fontaines D.C., Gustaf, Squid, Amyl and the Sniffers, and Boy Harsher.

Kim Gordon took full control of the stage, getting the crowd riled up for what was guaranteed to be a kickass set from none other than Fontaines D.C. The crowd chanted along to every word, from “Sha Sha Sha,” to their closing performance of “I Love You.” Fontaines had one of the largest crowds of the weekend at the Tecate Alta stage and after witnessing their intense performance, it was easy to understand why.

Gustaf was the perfect opener for the Tecate Alta stage on an early Sunday morning. Frontperson Lydia Gammill’s pure conviction and performance is as astounding as some of the greats. The band’s energy pours out of them during each and every song. A natural transition over to Squid was the perfect follow-up. Squid are easily one of the best performing bands to witness and they did not disappoint. Each song is carefully choreographed and the emphasis on each beat has your heart racing for more. 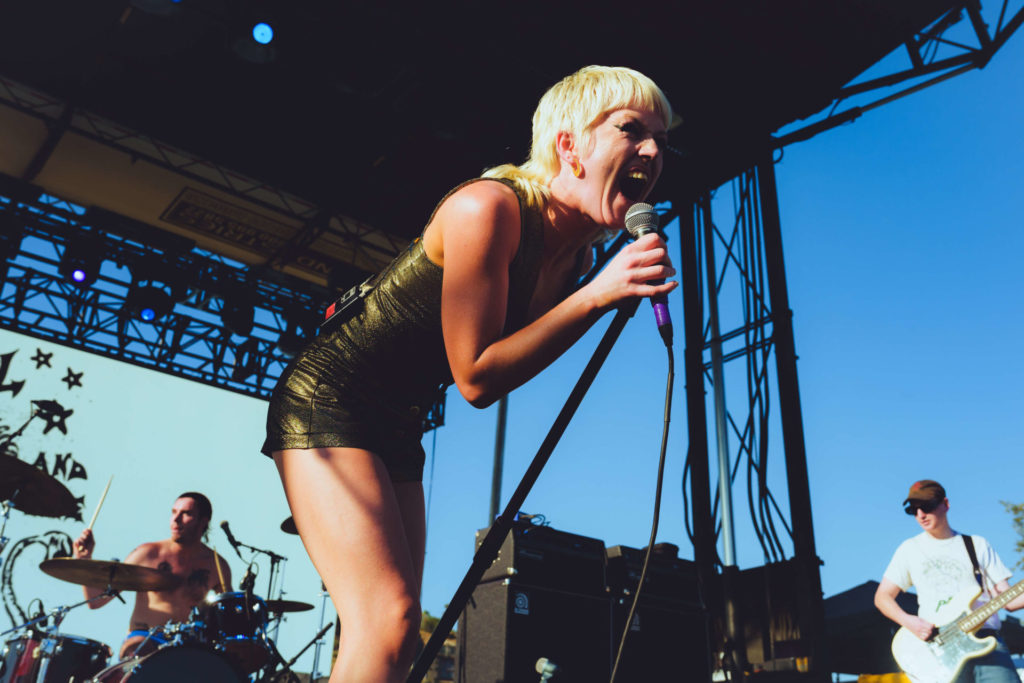 Amyl and the Sniffers knocked the house down as a mosh pit formed, with folks jumping out covered in sweat every few minutes. It was the rowdiest and quite possibly the most energy seen throughout the weekend.

The biggest surprise came from Boy Harsher, who brought out Cooper B. Handy (aka Lucy) and Mariana Saldañ (BOAN) to perform their two featured singles “Antonomy” and “Machina.” For the diehard fans in the crowd, it was a dream come true. For those who have witnessed a Boy Harsher set, the atmosphere feels like an integral part to the overall experience and even though they played while the sun was still out, it didn’t lessen the incredible performance both Jae and Gus put on. Although, there’s no denying, they would have been better suited as an after sunset performance.

As a first year festival, Primavera LA was a nearly flawless event and the few downsides were trumped by the extraordinary experience. 2023 now comes with high expectations, will we see you there?