After one giant leap into the new season, the TD Amplify Cabaret Series is launching into a world where the sparkling curtain is king and artists from across the galaxy converge. Your captain and crew for this journey to the stars is Sargeant X Comrade, otherwise known as Yolanda Sargeant and Evgeniy “Comrade” Bykovets, musical polyglots and dazzling talk show hosts of the future.

“We’ve done a lot of stuff within our own artistic arena and collaborating with Arts Commons gives us the opportunity to interact with artists from all different disciplines to create something completely new,” Sargeant tells RANGE. 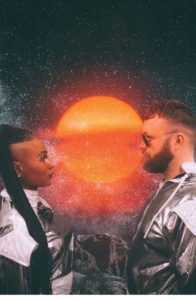 Offering a souped-up, funky, retro-fied vision of late-night television as a forum for constructive discussion and discovery, Sargeant X Comrade have landed on the theme of ‘Mars: Second Home.’ Their platform? A philosophically neutral space in which to explore a parallel universe that opens the floor to questioning what makes us human. Filled with humour and spiked with improvisation, this interactive series aims to entertain and engage with audiences in a mutually enthralling environment.

“Each show is themed as a different planet and the feel of that planet will actually merge with the Talk Show,” Comrade explains, “So, the first instalment will be on Mars. We’re trying to create a fun atmosphere where the overall theme is lo-fi future. Looking at space travel or whatever your mind can conceive and that’s what we’ve done here. We’ve brought these artists together to create and now we’re gonna see what comes out of that.”

A quick flip through the neo-soul duo’s little black book reveals an eclectic guestlist that interstellar dreams are made of. Expected appearances include the likes of hip-hop dualists Jae Sterling and Contra, as well as colourful live performances by musicians including cellist Jenny Crane and multi-instrumentalist Kue Varo. Other episodes will tie into the stunning visual spacewalks woven by digital topographer and projection artist Mackenzie Bedford, who will transform the venue into her own personal light studio.

“There’s a lot of artists, and a lot of invention, and different ways of looking at things that were actually created through the imagination of visual artists or storytellers. It will be interesting to see what’s created out of what we’ve put together,” Sargeant continues. “With Mars we’re exploring the concept of the planet being the twin to Earth. We called it the Second Home. It’s going to be a retro-futuristic variety show that basically asks what separates us from our Martian neighbours and the possibilities.”

Focused on illuminating individuals who push the boundaries of their genres and present unique perspectives and modes of operation tops the menu as Sargeant X Comrade’s cosmic variety show brings a diverse and thought-provoking array of talent to the stage of the Engineered Air Theatre at Arts Commons. The duo will additionally be responsible for curating gallery spaces at Arts Commons such as the +15 Soundscape, where they’ll be facilitating the display and absorption of works by maximalist composer Jonathan Kawchuk and activating the Broadcast Lab, one of the only permanent exhibition spaces for film and media in Western Canada.

“For the Cabaret on stage we chose to host multifaceted artists and bands to present in a talk show kind of fashion,” Comrade says of their year-long residency project. “In the galleries and lab spaces there are different artists each quarter who will be showcasing their art. Our Cabarets are a way for them to sit down and discuss their art, which is being displayed in these other spaces. It’s also designed in a way that behind the scenes there’s workshops and skill-building exercises. It’s a training program that builds them up and makes them shine.”

Celebrated for their own representation of the underground music scene, the Polaris Prize-nominated Sargeant X Comrade look forward to introducing their audience to emerging and marginalized artists who are circulating on the fringes of the mainstream. This “Incubator” program effectively encourages interdisciplinary professionals to share their talents and insert themselves into the conversation.

Over the course of the four-cabaret series, Yolanda and Comrade will welcome almost two dozen up-and-coming local creatives who will have the opportunity to benefit from their experience and mentorship. It’s the kind of real-world career coaching that can theoretically save an artist light years when it comes to navigating the wild frontier of the multimedia artscape. Not to mention transporting the lucky voyager voyeurs in attendance to the alien shores of a once-in-a-lifetime and never-to-be-repeated cultural phenomenon that could be talked about for the next millennia.

“Now it’s 2022, we’re living in the future that they projected in the 1950s. How will future generations view us? Will they look back at us and laugh?” Comrade ponders. “We’re putting forward ideas and Arts Commons is behind us to make cool things happen. If that means living in a bio-dome to prepare for Mars: Second Home, I’m absolutely down for it.

Catch a ride with Sargeant X Comrade to Mars: Second Home, Nov. 18 and 19 in the Engineered Air Theatre at Arts Commons (Calgary) | TICKETS