The Aussie singer tackles the opioid crisis in his most compelling role yet.

Photos by The Bloody Beetroots, Design by Alex Kidd

Alex Cameron is hanging out alone at home in his Brooklyn apartment with his cat, Homer. The Australian songwriter is tinkering about and enjoying the silence while preparing for his upcoming tour, which — despite recent last-minute cancellations of some major tours — he’s optimistic will actually happen. With the exception of the odd meow from Homer every once in a while, the apartment is surprisingly quiet, which isn’t always a given considering that Cameron lives with his partner, actress/director Jemima Kirke (Girls, Sex Education), and her two children.

“Shit, man, how am I?” Cameron repeats back as he fumbles with his camera, his unstyled hair going every which way as though he just scrambled to put on the vintage Wilson hoodie that he’s wearing before jumping on the line. “I mean, fuck, I’ve been better and I’ve been worse. I’m definitely one of the lucky ones though; I’ve managed to stay productive the past couple years.” 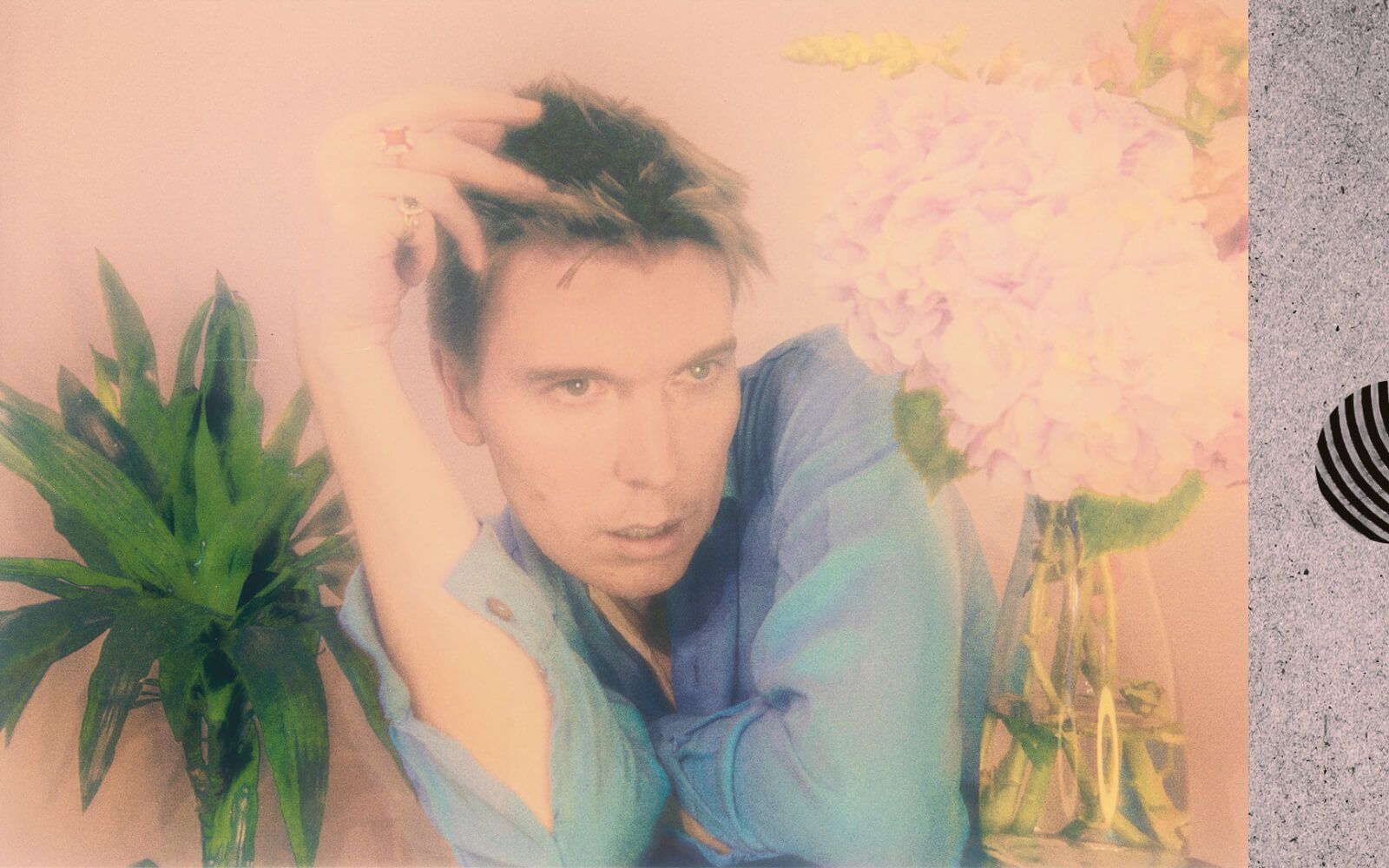 The past couple years is really all you can say when you’re talking to someone you’ve never met before, referring to this very strange and universally felt moment in time, but Cameron is in good spirits and ready to move forward. One glance at his discography confirms productivity has never been an issue for him and his output has always been consistent, albeit a little confusing for any newcomers.

On his 2013 debut, Jumping the Shark, Cameron slicked back his hair and introduced himself to the world through a high concept alter ego; a tragic washed-out musician who he used as a prop to take the piss out of the music industry. The uncertainty surrounding this bit — accentuated by stage makeup that consisted of latex wrinkles, scars, and pockmarks — might be the reason why it didn’t quite catch right away. But while music critics were sitting around scratching their heads wondering who the hell he actually was, Cameron was winning over fans one show at a time and making major in-roads as a new cult favourite with his outlandish take on synthesizer-fuelled pop music. 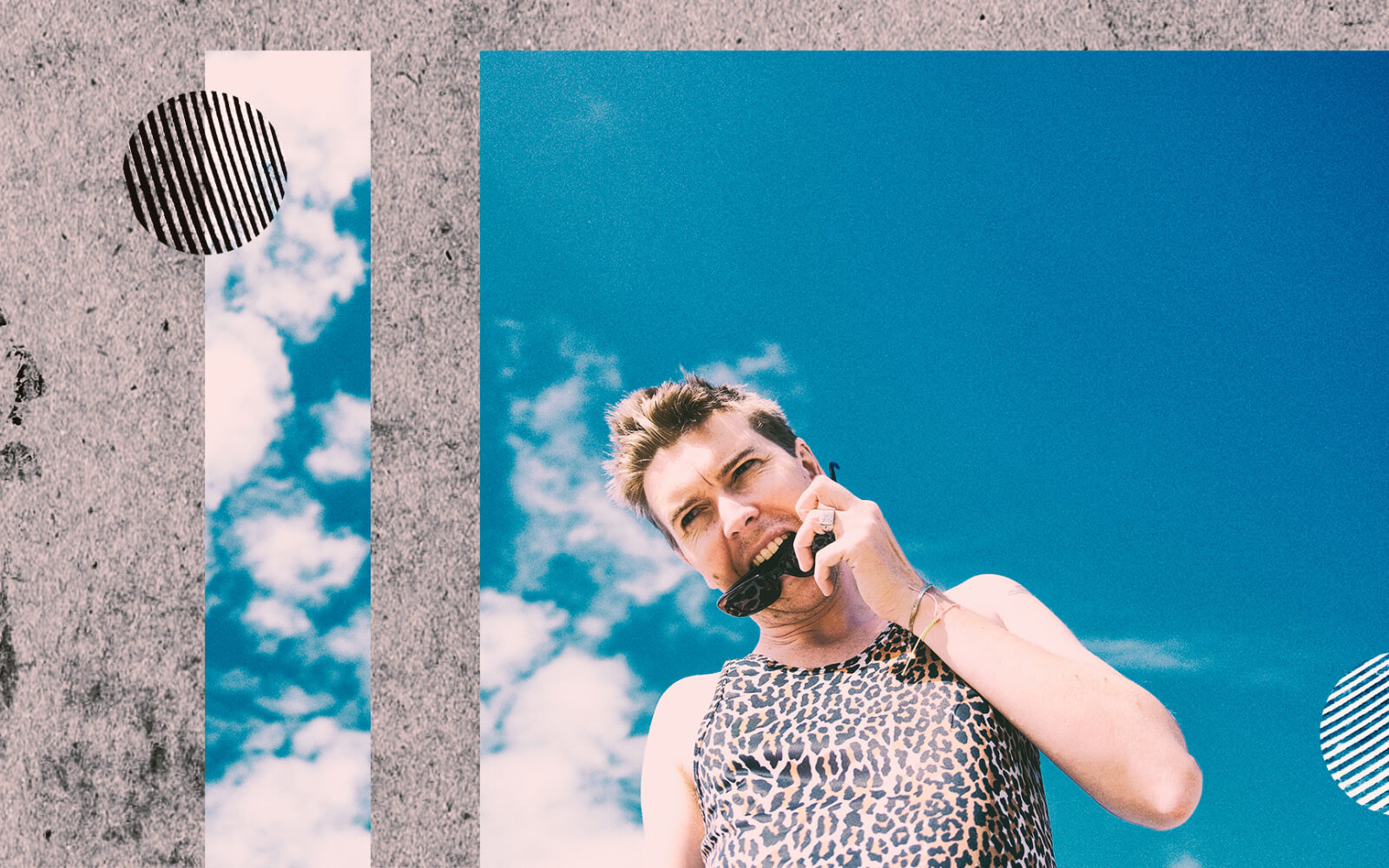 After catching the attention of indie duo Foxygen at a show in Paris, it wasn’t long before Cameron was properly sinking his teeth into North American audiences, making friends in high places and touring with the likes of Mac Demarco and Unknown Mortal Orchestra in support of his debut’s 2016 reissue on indie label Secretly Canadian. Cameron had already moved from Sydney to New York by this point and kept his momentum going with another ironic perspective in 2017’s smarmy Forced Witness. Only this time, the singer transformed his songwriting persona from misunderstood lounge lizard to synth-pop sleazeball. The songs were sung through the ugly perspective of a modern macho man, but the music was perfectly polished and catchy as hell thanks to his sax-wielding “business partner” Roy Molloy, producer Jonathan Rado, and an unlikely collaboration with The Killers’ Brandon Flowers who Cameron has also lent his songwriting skills to multiple times. Listen to The Killers’ 2017 album Wonderful Wonderful and it’s hard not to hear the songwriter’s influence.

One of the highlights on Forced Witness, and possibly of Cameron’s career as a whole, is his duet with Angel Olsen on “Stranger’s Kiss.” The song is an epic Meatloaf-inspired ballad and its accompanying video is directed by Kirke, his loving partner and muse who has since starred in and directed a number of Cameron’s music videos. “Jemima is an incredible visionary,” he says, lighting up when asked about their working relationship. “She’s whip-smart, incredibly intelligent, and her taste is just the finest and best in the world. Anyone I’ve ever come across has never even come close to Jemima in terms of her ideas. She’s just amazing.” The power couple’s most recent collab was for the video accompanying lead single, “Best Life,” from his forthcoming album, Oxy Music — an album where Cameron dedicates most of its focus and narrative to the opioid crisis.

Over the last two decades, the opioid crisis has been linked to more than 500,000 deaths in the US alone. These numbers are alarming, but often get swept under the rug when overdose and addiction are cloaked as “something that happens to other people.” Cameron, however, has been paying attention and channelling his penchant for other people’s perspectives into confronting this widespread and growing epidemic. Of all the viewpoints Cameron has tried on for size, the opioid crisis might be his most impactful yet. “All I’m trying to do is find out how I can make this something that people can understand on a level beyond small talk,” he says. Cameron chooses his words carefully, taking time to communicate his perspective in a way that doesn’t sound like someone trivializing his subject matter. And he’s not. Cameron lives his characters and sees through their lenses.

“I fully understand the lifestyle of a junky and I suppose I’m coming to terms in a lot of ways with what it actually means that I do understand that.”

“It’s safe to say that when I write most of my songs I’m drawing, at the very least, from a personal experience in some way or another, always. I fully understand the lifestyle of a junky and I suppose I’m coming to terms in a lot of ways with what it actually means that I do understand that,” Cameron pauses again, hesitant to talk about his own relationship with drugs. “Maybe it’s because of the album, you know? And that’s something I’m going to have to contemplate for the rest of my life. When I have an idea, it does lead me down a path. There’s not a single album I’ve made that hasn’t fully impacted my life. There are consequences to artistic decisions. I know that sounds ridiculous, but there are real life consequences when you try to do what I’m doing. And, and… My cat is drinking out of the toilet.” Cameron scoops up Homer into his arms and puts him on the camera to lighten the mood. *Meow* 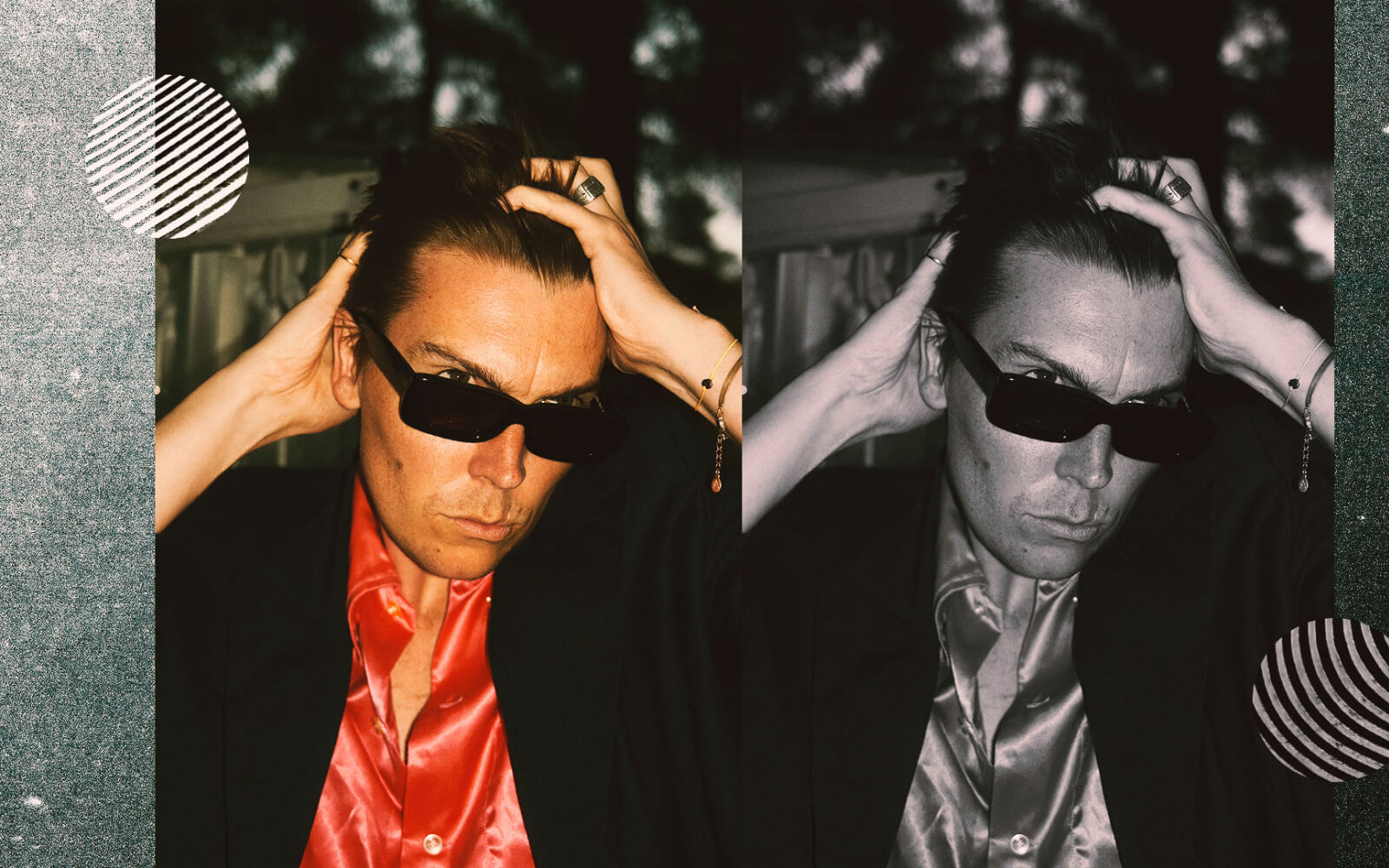 From the climate crisis to COVID-19, there’s no denying the world is on fire, and while a war wages on in the Ukraine and health officials continue battling to curb our most recent pandemic, drug addiction remains an escalating issue and everyone is losing. Does Cameron have a solution? “I think it’s going to require awareness. Culturally,” he says pointedly. “We can talk about specific medical treatments, but I’m no doctor or psychotherapist. What I can tell you is it’s going to have to change. What’s going to have to change is how people day to day view it and how people who are involved or affected by it view it. That’s when things will change.”

Capturing the immediacy of the current cultural zeitgeist while making something timeless all at once, Oxy Music is Cameron’s most exciting and compelling role yet. Musically, it pulses and soars with the pop sensibility that he perfected on 2019’s Miami Memory. And he’s invited some interesting personalities along for the ride, including Sleaford Mods’ Jason Williamson, who makes his brut presence felt on the album’s euphoric title track and album closer: “If you want some fun, you only need one bullet in the gun,” Cameron and Williamson sing together as synthesizers ring listeners out into the darkness. “When I write — especially on this record — I’m writing from the perspective of a person who is essentially in the midst of a scary and extremely self-destructive illness,” Cameron says. “The first time a person chooses to do an opioid might be a choice. And maybe the second time as well. But eventually it’s not their choice.”

The opioid epidemic doesn’t discriminate, and Oxy Music is serving as a tool of compassion and understanding in normalizing conversation around addiction. If you or anyone you know is struggling with addition of any kind, please consider reaching out to the following resources:

Canada
Canadian Centre on Substance Use and Addiction