FLETCHER Is Committed to Being the Pop Star She Never Had

After a juicy collab with Hayley Kiyoko, the indie-pop singer is tuning into her romantic side.

Despite her pristine voice and natural affinity for the genre’s thrills, New Jersey indie-pop artist Cari Fletcher aka FLETCHER never felt a kinship with the term “pop star.” She was always highly serious about music, committing to classical training as early as five years old and attending music school at NYU’s Clive Davis Institute. She provides a lengthy list of vocal health tips on command. But when she turned on the radio in her youth, she never heard any of the stories that she longed to tell in her own work, the dominant narratives drenched in heteronormativity. With her latest releases, that apprehension is finally eroding as she makes it her mission to fill the void and be the pop star she never had.

Fletcher is just over a year removed from her acclaimed EP, The S(ex) Tapes, a deeply personal, often uncomfortably specific, and extremely vulnerable set of tracks about an ongoing breakup she could never quite pull away from completely – her ex-partner, a photographer, even shot all the videos and artwork for the project. Her latest singles — “Cherry,” featuring Hayley Kiyoko, and “girls girls girls” — finally lift the somber attitude and see her celebrating frivolous and unapologetic romance set to trap beats and tropical synthpop.

Still, Fletcher is the kind of person who threw her filter in a trash compactor long ago, ready to open up about her deepest secrets to a stranger at any moment. She appears over a Zoom call dressed up on top, immediately defeating the purpose of the hidden sweatpants just out of frame by revealing them seconds into the conversation. As she recounts her long journey to self-acceptance, she speaks quicker than her ideas are fully formulated, syllables pouring out laced with curses. “I lived with a lot of fear for a really long time,” she says. “When I put out my first music video that featured a same-sex relationship, I had a lot of people being like, ‘Are you sure you want to do this? What if it alienates people? What if it hurts your career?’ Then I got the response from people about feeling represented. So, my mission statement the whole time has been ‘would I have needed to see this?’”

Fletcher beams when articles compiling reactions to her latest material are brought up, with fans tweeting about how her latest tracks feel “comforting” and “safe,” calling being able to inspire these feelings “the biggest home run” of her many achievements.

In this sense, Fletcher has come a long way from her career beginnings, her attitudes towards telling these stories having recently shifted. While her music videos have always featured queer imagery, before her latest run of singles Fletcher always intentionally excluded gendered pronouns in her lyrics. She often emphasized in interviews that the heartbreak she sang about was universally relatable regardless of the genders a listener is attracted to. “There were these voices in the back of my head that were like, ‘we don’t need to be too specific because we want to include everyone. I think I was probably dealing with some internalized homophobia as well,” she says. “But I have just learned the power of specificity. I have quite literally made a career out of my personal information. So, there’s something that feels really empowering about being like, ‘No, this is actually who I’m singing about. This is the story.’”

Subversive recent number one hit singles like Cardi B’s “WAP” and Lil Nas X’s “Montero (Call Me By Your Name)” contributed to pushing Fletcher over the edge, inspiring her to remove all metaphors and taking the plunge into confidently displaying every aspect of who she is. “Some people were so turned off by [Montero], but we’ve literally listened to so many men talking about hooking up with girls all the time,” she says. “Why can’t we flip this narrative here? And girls can also do the same.”

Not only is Fletcher excited at cultural boundaries showing signs of a meaningful expansion, but the music industry is shifting to help break down barriers as well. Fletcher strives to provide opportunities as many women as possible to join the ranks of her studio personnel – from producers and writers to the studio musicians, and praises new platforms like Spotify and TikTok (despite her general distaste for social media) for removing the gatekeepers and allowing just about anything to find a dedicated audience. In 2019, Spotify invited Fletcher to speak at a conference organized by Fortune magazine as one of the greatest success stories of their algorithm helping new artists after her breakout single “Undrunk” went viral. “Anybody could have a moment, anybody could have a song,” she says.

The FLETCHER stage name, on the surface, is just Cari’s last name in all caps. Symbolically, Fletcher often pictured her onstage persona as her highest self, a future to strive for when her worries faded. These days, Fletcher believes the gap between Cari and FLETCHER is smaller than ever before – it’s just that she’d rather be Cari. “I’ve been on a bit of a spiritual journey over the last year and a half. What I’m realizing is that I’m coming closer to Cari. The beauty in connecting to people with my artistry is actually in the shit that makes me flawed,” she says, quickly rolling her eyes at the final word and revising her statement. “That makes me me.”

Fletcher has spoken extensively about feeling debilitating stress on release days, preparing to put her darkest and most troubling thoughts into the open. While her recent music is just as personal, that stress has mostly evaporated. “I’m at a much more celebratory, joyful part of my life,” she says. “I’m having fun thinking about the idea of performing it on tour. It’s been a different experience putting out music that’s not about being heartbroken. It’s a celebration of myself, which feels like a really beautiful space to be in.”

One of Fletcher’s musical odd jobs while she was finding her footing involved dressing up as Disney princesses for kids’ birthday parties. With her new red hairdo, she notes that she’s been feeling most like Ariel lately. It feels oddly appropriate – just like the famous mermaid, Fletcher has rediscovered her voice.

One of the past decade’s most prolific songwriters is stepping out from behind the pen with a new name and persona. 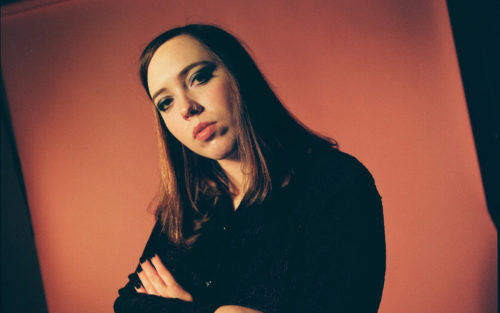 With her third album, the singer-songwriter captures a sense of dread and makes it her own.