After a period of darkness, the alt-pop songstress reemerges with fresh new tricks up her colourful sleeves.

Lights has been a chameleon in the world of pop, rock and electronic music for over a decade now, and the Canadian singer, multi-instrumentalist, producer and interdisciplinary artist is preparing to enter her next era unsheathed and uncensored. “I’m more self-realized now than ever – literally because I swear now and no one cares, she says.” To summarize her latest project PƎP, Lights says, “There’s some sassy shit on there.”

She takes the Zoom call from her van while her daughter, Rocket, competes nearby in her first hockey tournament. Wearing purple Audio-Technica headphones, a silver septum ring and a stack of necklaces, she speaks at lightning speed pace with a nonstop smile. Despite her album and tour rapidly approaching, she still finds time to kick back. “I reward myself with games,” she says. “I’m playing Elden Ring right now.”

It’s been four and a half years since Skin&Earth, Lights’ last full-fledged release that came with an accompanying comic book. Whether reimagining the tracks in other genres or building up multimedia worlds, Lights always seems to relish in expanding upon her creations, and she also released a follow-up comic, The Clinic, which she also illustrated last year. The story depicts a place you can go to plug in and escape into different scenarios using music as an anesthesia. As seen in the music video for “In My Head,” featuring Twenty One Pilots drummer Josh Dun, there are no limits to the roles Lights can play, whether she embodies  a bazooka-wielding cowgirl, a golden rockstar in the studio or a curious listener turned into an obsessed consumer.  “It’s been easy to personify these songs because for the first time, I’m being really blunt about what I’m trying to say in the song instead of wrapping it with poetry,” she says.

We’re no strangers to Lights’ alter egos and sonic explorations. Since her last LP, she’s made deep impressions in the electronic scene, collaborating with producers such as MYTH, Felix Cartal, Morgan Page and deadmau5. Her side project LŪN was a deep dive into dubstep, an alias based on a character in the Skin&Earth comics that looked like a Lights doppelgänger masked with a fox skull. The music immersed listeners in gritty bass lines and mysterious vocals in a glitchy, goth-bounce seance. Now, Lights is doubling down on the pop instincts that got her here. 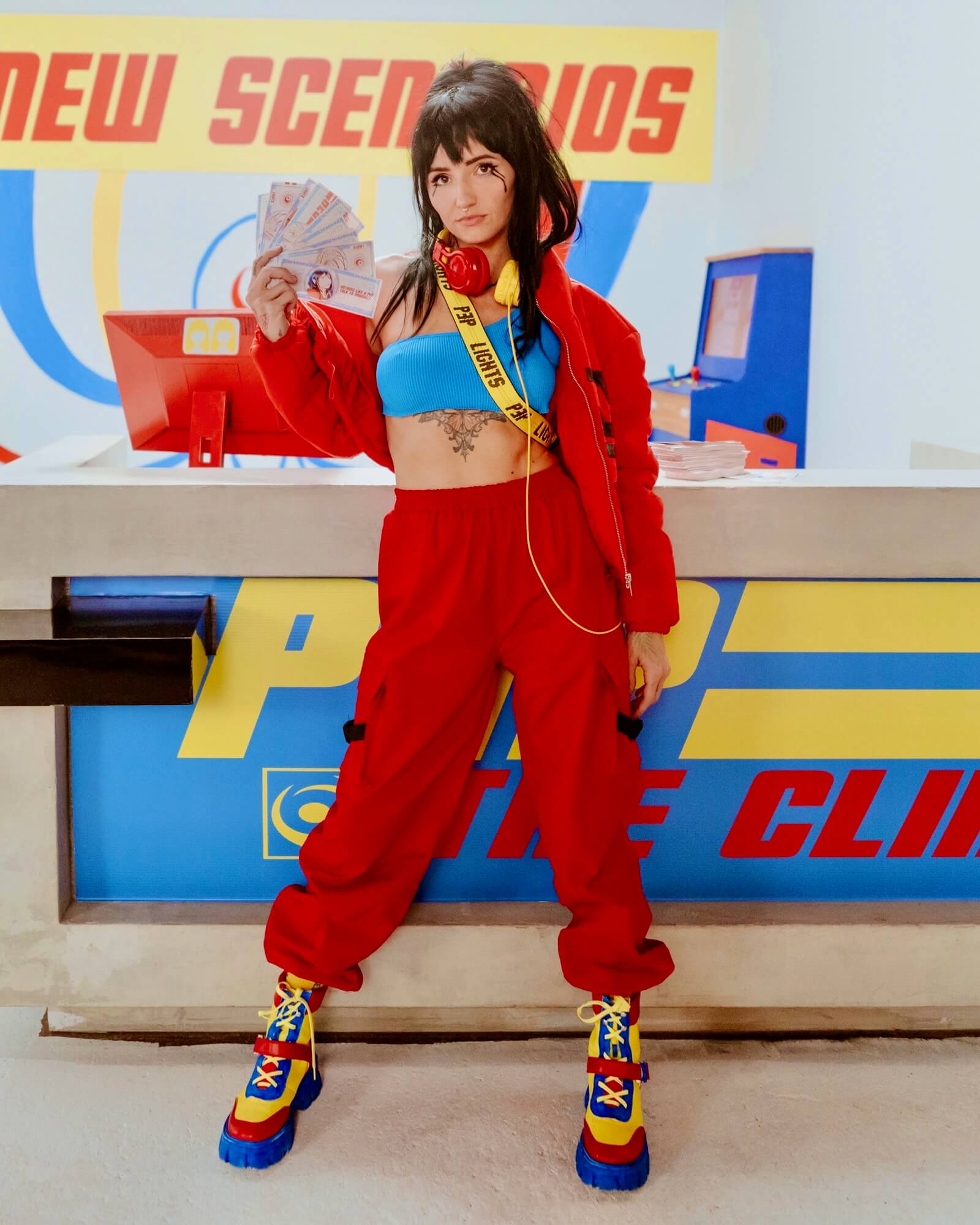 On her fifth album, PEP (Stylized: PƎP), Lights grabs your attention and promptly sends you into a hypnotic groove. And in classic Lights style, she injects positivity and energetic riffs into the darkest spaces. It’s funny and relatable, touching upon the ridiculousness of some of the most manic parts of the human psyche that we try to forget are lurking in the background. Each track is distilled down to a basic icon in red, blue and yellow flashy graphics. “My reference, once I started building the project, was this cool Japanese tech product,” she says. “I did the album cover design. I did a lot of the art, pulled the colours together and just built this really bright, obnoxious “I’m a product!” music.

Lights makes her industry disillusionment crystal clear: “My music is a product – when Spotify takes my music and they’re making money on it too, because it’s a product. It’s not anything sacred. While it’s a product that affects us and takes us away and helps us escape, isn’t that ironic that this is a product just like milk or a fucking car. So let’s have some fucking fun branding this like it’s a tool from Home Depot,” she says.

Lights designed the album graphics and made the prop PEP cash and the vending machine that appear in the music videos. Lights has her hand in part of the creative process as she pleases. It was also very important to her to bring more women onto the project, as the final product boasts 50 per cent of the credits to women. The band on her upcoming North American shows means that for the first time, there will be a majority of women on her tour bus.

Across 13 tracks, Lights morphs between a badass rocker, emo singer-songwriter, and slick talker. The dichotomy of sad and hopeful is at the core of Lights’ artistry. “The lyric I love the most in this record is: I always say I’m the happiest sad girl you’ll ever meet,” she says, referring to “Okay Okay.” “With these songs. I’m able to dig in deep. I’ve always said over the years, like, when I write music, I ‘Dr. Phil’ myself. Basically taking yourself to this therapy course where you’re running through – Why am I feeling this way? Why am I doing these things? – You’re just always looking inward,” she says.

Lights has been open with her struggle with depression and found solace in reading materials and counselling. They led her to a more self-aware outlook and, in turn, expression with greater vulgarity, honesty and faith in her desires. Opening track “Beside Myself” starts at the bottom of this self-discovery. She has always been transparent in her vulnerability, and the song finds her  tenderly asking for patience as she navigates a solitary version of herself. In order to continue building worlds of her own, Lights grew more conscious of her place in the universe and across social, financial, and spiritual lines.

She draws on sexuality and religious reckoning as she reflects on “Prodigal Daughter” as well. “I’m gonna tell everybody that I can be a hoe if I want, but also I can have strong opinions on feminism,” she says. I can be a mother. There is no limit to what we’re allowed to do as women. It felt different 10 years ago.” Lights admits that she often felt pressure to adhere to the perceived purity of her public image. Today she lets her crass mouth run freely.

Lights shows off honed vocal chops including sleek flows, satisfying cadences and previously unexplored lyrical pockets. She directly attributes it to another unexpected career move for her: the Drake cover album she recorded back in 2018, Scorpion Side B. “I came up on emo, post hardcore, and screamo music and it was appealing to me at the time when I was a teenager because it was so vulnerable… It’s just overly emotional and dripping with intensity and I always loved that,” she explains, taking a diversion to quote some  Taking Back Sunday lyrics.

On “Salt and Vinegar,” Lights tries spoken-word verses on for size, and goes down for an anti-chorus with a bass riff instead of elevating the energy like the typical pop chorus. “It’s a lot of experimenting with taking the pop ideology and flipping it on its head,” she says.

Even though every track has a line or two that would sting to hear or admit out loud if it weren’t for the electrifying tones, Lights likes to regain control of her inner narrative through pep talks to the tune of “I’m the fucking best.” While the rest of the album appears dressed in happy colours, Lights explains, “It’s blatant overconfidence. It’s on a backdrop of this destitute world that we live in. We’re all just wrecks. All we can do is bring ourselves up by lifting ourselves up and that’s what this is all about, this cynical sarcastic pep talk like, ‘I’m the fucking best.’

“Your mind will believe everything you tell it. If you continue to tell your mind that you’re not good enough, then you’ll believe it. But if you start telling yourself that you’re a fucking boss, you’ll start to believe it, too,” Lights says with complete conviction.

PEP is out now on Fueled by Ramen. Lights’ “Baby I’m Back” tour begins in Portland on April 3 with a stop in Toronto on May 7.