After two years apart, the post-punk luminaries reflect on working remotely, learning from their mistakes, and making Arrangements.

As a light rain falls on Montreal’s Parc Mozart, Preoccupations look exhausted. It’s a welcome, cooling drizzle—the post-punk luminaries are sweating from the humidity of a typical Montreal summer, but also from being cooped up in a studio for close to four hours during the band’s photo shoot with RANGE ahead of their fourth studio album, Arrangements.

The sun slowly sinks in the sky as the band—Scott “Monty” Munro (guitar/synths), Matt Flegel (vocals/bass), Mike Wallace (drums), and Daniel Christiansen (guitar)—decompress and reminisce, cracking open a few cans of Old Milwaukee. “We’ve done a bunch of these photo shoots and it’s never a quick thing,” Flegel laughs, rubbing his eyes. “We’re happy to do it, but we’re not as young as we once were, y’know?”

Flegel is wearing a white t-shirt and some cowboy boots he got off Etsy, reminiscent of an old Italian Spaghetti Western. Wallace looks like he just walked straight off the runway in his Giorgio Armani shirt with purple and black stripes. Christiansen looks like a disheveled venue manager with his frazzled hair and plaid button up. And Munro’s linen shirt is giving off major cult leader vibes. Earlier during the photo shoot, the photographer joked with Munro that he looked like he sold “the good drugs.”

“I look like I sell the drugs you’ve never heard of before,” Munro jabbed back.

The band is finally all together again after spending the last year and half apart. While Christiansen and Monty have been living in Montreal, Flegel has been in Brooklyn, New York and Wallace in Toronto. Reunited, the band is gearing up for another intense bout of touring in support of the new album.

Arrangements is somewhat of a back-to-formula album for Preoccupations, and one of their best. Thematically, it touches on some dark subjects, like a decaying, dystopian, world that seems on the brink of total collapse, as everyone who can do something about it just sits back and watches. It’s a familiar theme for the band, but on Arrangements, it seems like Preoccupations have hit their stride.

The sonic skeletons of the album were worked on in the fall of 2019 when Flegel and Christiansen met up with Munro in his Montreal studio. The three wrote most of the music, with Wallace eventually joining them to lay down the drums. Preoccupations then decided they would all meet up a few months after Christmas to put on the finishing touches.

When COVID foiled those plans, Munro found himself on tour with his partner, Marlaena Moore, isolated in his parents’ Calgary home. He built a makeshift studio to keep working on Arrangements and fondly remembers diving into an endless supply of weed gummies for inspiration. He and Flegel would then send over the tracks back and forth remotely.

“I kind of went a bit mad and obsessed over the little sounds on the album.”

“I kind of went a bit mad and obsessed over the little sounds on the album,” Munro says. “I really wanted guitar back in the spotlight for this one. “There are still keyboards, but the guitar just has this visceral quality to it and I think we were missing it.”

“I was recording vocals in this windowless, roach basement,” Flegel says. “I think that feeling of hopelessness probably trickled its way into the vocals.”

Preoccupations formed in 2012 as Viet Cong, a controversial name they changed in 2016 — but more on that later. After Matt Flegel’s now-defunct art rock outfit, Women, called it quits, he started jamming with Munro in his Calgary basement. The two had recently played together in Chad VanGaalen’s touring band and eventually recruited ex-Women drummer Wallace, and Christiansen, who they’d played with in a Black Sabbath cover band. “It started off with a few real junky recordings in Monty’s basement and then we grabbed these fun guys,” Flegel says, pointing to Wallace and Christiansen.

“We all love Sabbath,” Wallace says, holding up his foot to show off his Black Sabbath Paranoid edition Converse high tops.

Self-releasing a cassette, the band went on their first tour with Victoria’s Freak Heat Waves. All four members ended up living together in a Toyota Echo for six weeks as they zig-zagged their way around North America, packed like sardines.

Just as Preoccupations are telling their first tour story, a Toyota Echo drives over a speed bump outside of the park.

“Speak the devil’s name and he shall appear,” Munro says. The band erupts in laughter.

“That tour was legendary,” Christiansen remembers.

“Legendarily bad,” Flegel interjects. “We had all our gear in the Freak Heat Waves van. “It was fun, but a lot of nights were just playing for the bartender. We were all broke too.”

“But we were selling cassette tapes and half of them were completely blank,” Munro laughs. “They didn’t dub properly so I had a folder on a computer of the WAV files and whenever someone emailed me about the missing music, I just sent them a link to the Dropbox and said ‘Hey, just dub them yourself. It’ll sound better.’”

“It was a low rent tour and by the end we were pretty good at playing together,” Flegel says. “We didn’t kill each other either. And under those circumstances, if you’re still standing, then you’re a band.”

There’s another tour story Preoccupations reminisce about; a story that will stay burned in the back of their minds for the rest of their lives—the time they almost indirectly committed manslaughter in New Orleans.

“So we’re parallel parking in this spot, and I hear this,” Wallace says, pausing to smack his hands together to mimic a quick impact. “A shiver runs up my spine. Matt’s on the wheel and I jump out of the window and see this guy’s head, maybe a foot and a half from the van’s wheel. I yell ‘STOP,’ and I remember the fear in the guy’s face. Turns out he slipped in horseshit and landed on the road just as we were pulling in.”

“That was an eventful night, but I remember it really bringing us closer together,” Christiansen says. “There’s always something that happens on tour.”

Preoccupations are in good spirits now, but they know the inevitable question about the Viet Cong name change is going to arise. Flegel senses it after Wallace says the band is “banned” in Halifax. “I think we’d probably be fine to book there now,” Flegel says. “It’s been quite a while and we did the thing that we had to do and I think we’re better humans because of it. I mean, I know a lot of history about the Vietnam war now.”

To say there wasn’t much thought put into the band’s original moniker would be an understatement, and in 2015 it caused public outrage—especially in the Vietnamese community—which led to protests outside of their shows and canceled tour dates. The band was just starting to gain momentum after releasing their first, self-titled full-length album on Flemish Eye in Canada and Jagjaguwar in the US, but they had to make a move if they were going to continue on. “At the time, I’ll admit I was pretty ignorant to the whole situation and didn’t understand that it was offensive. So we tried to talk with [the protesters] a few times, but mostly, people just wanted to yell at us,” Flegel says.

“Which is fine,” Munro adds. “But we were in the middle of a long tour and it’s hard to change your band name and everything associated with it in the middle.”

The controversy became the aspect everyone associated with the band, so all that momentum kind of fizzled out. It was stressful for the four members to say the least. Perhaps this is why a song like “Anxiety,” on their 2016 Preoccupations album, punches so hard—the band truly lived it.

And as they considered new names, another problem arose. The band was now on a label, which meant they legally needed a fresh name that no one had ever used before. “We had hundreds of names rejected because of that, and then you have all these people screaming at us, which again, was a warranted reaction I think,” Flegel says, “But we honestly did the best we could.”

“I think people thought that we were jerks, or thought it was a political statement,” Wallace adds.

“Yeah, but we’re past it now and a little wiser I guess,” Munro concludes as the others nod.

A few hours before the photo shoot, Preoccupations were figuring out how to play some of the Arrangements songs live before their North American tour. Each member agrees that recording the album is one thing, but learning the songs in a live setting is a different beast.

“Like I said, I kind of went crazy with the guitar and layering a bit,” Munro says. “Danny’s guitar is in a weird tuning and we have some walls of sound we need to recreate on stage.”

“It seems like loud guitar music is kind of more of a thing now, and maybe better than the last time we put out a record,” Flegel chimes in.

“So yeah, it’s not going well,” Wallace laughs. “I wish we could say we got it nailed down in a day, but that’s just not reality.”

But Preoccupations will nail it, because under all the jokes and wild tour stories, they’re a professional band of musicians with over a decade’s worth of chemistry. And when they’re feeling frustrated, maybe due to the wrong guitar tone in a song, or a part coming in too late or early, they will persevere.

“Or Danny, our court jester, will tell some wild story after a few beers and we’ll all laugh and be like ‘OK. Again,” Flegel laughs.

“That’s kind of what it’s all about, right?” Christiansen says. “Having fun. Without that, we’re just four dudes who happen to play instruments kind of good.” 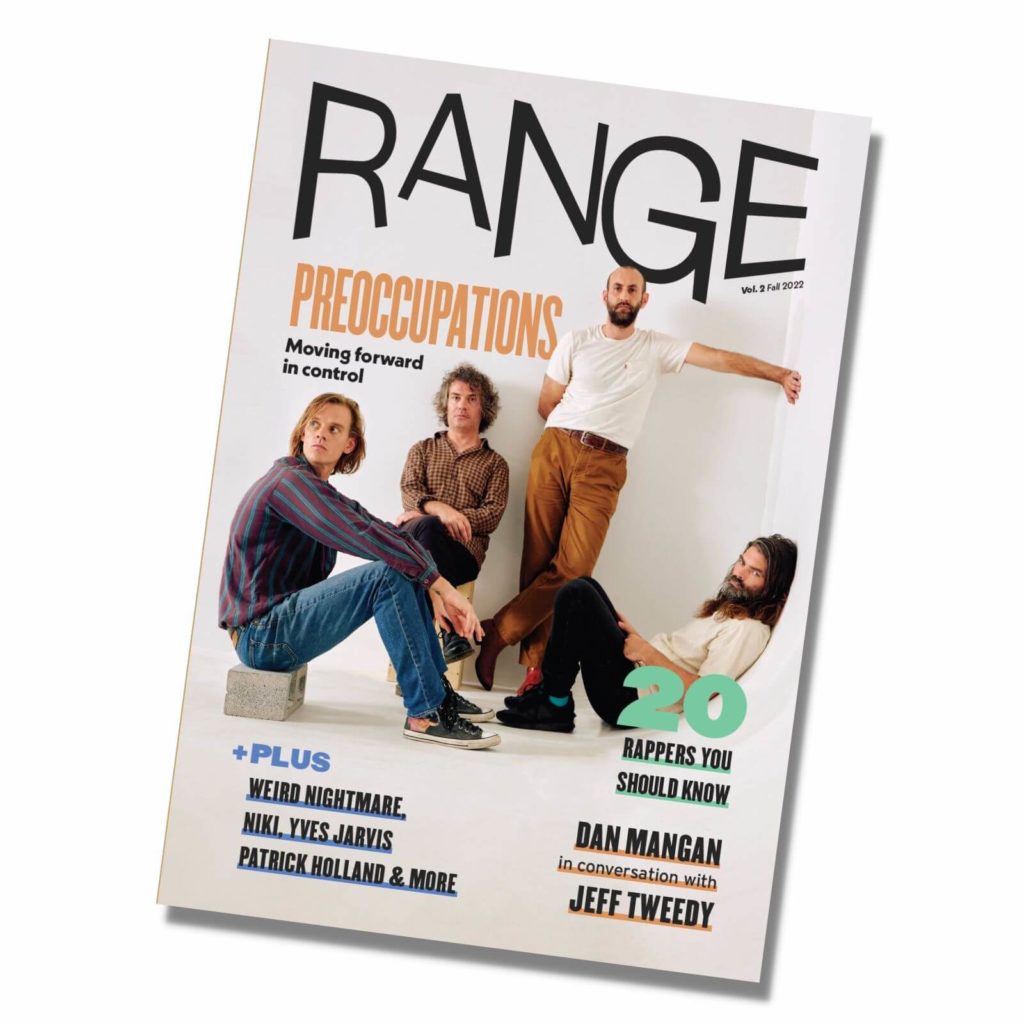 After two years apart, the post-punk luminaries reflect on working remotely, learning from their mistakes, and making Arrangements.