It’s not often that a punk band gets invited to collaborate with music royalty, but UK post punk quartet Yard Act have been balancing an on-going relationship with Elton John over the past year, and the track they recently dropped is one of the best collabs you’ll likely hear all year.

After claiming Yard Act to be his new favourite band, the Leeds locals covered “Tiny Dancer” as a thank you for Sir Elton’s on-going support. Shortly after, Elton John obtained lead vocalist James Smith’s number, and conversations began flowing. “We asked if he fancied collaborating and his reply was ‘abso-fucking-lutely.’ We spent the afternoon at a pretty swanky London studio with him and got on really well. He’s wicked and just a devout fan of music in all forms.”

It didn’t take long for the band to get comfortable. The nerves kicked in moments before Elton walked in, but as they began working away, the music and chemistry started flowing. With Elton’s knowledge on jazz and blues, he showed the band how to pick out notes within a chord structure and how to turn harmonies inside out. It was a learning experience, to share a space with a talented musician such as Sir Elton John. “What I got from Elton was to witness one of the most successful singers and songwriters in the world sit and treat us as his equals, and to want to learn from us. It was that lack of ego and his devotion to songwriting which taught me alot about how I want to approach my own playing and songwriting for the rest of my life.” 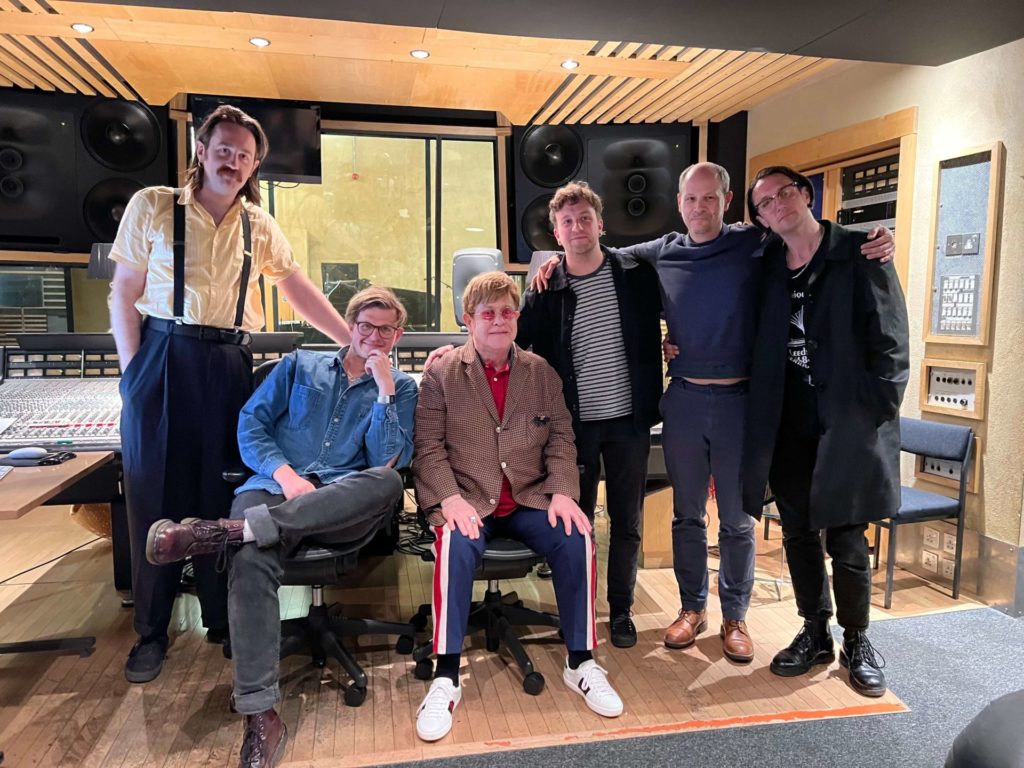 The lads having a sit in the studio with Sir Elton John.

You can imagine, being a band as new as Yard Act and seeing such success in a short amount of time, may be hard to grasp; which is entirely the case. None of the lads have had a second to sit with themselves and truly understand the craziness of their career. “In terms of this whole year, I haven’t had the chance to reflect on any of it and I don’t really know what’s happened. I don’t think I’ll understand how life changing the last year of my life has been until many years from now when I have some time to sit in my old leather armchair and tell the grandkids about it.”

On top of selling out their first run of North American shows in early 2022, while experiencing New York for the first time, the band were asked by Jimmy Fallon to come play his show. “I’ll never forget that. It was massive. I don’t know what else to say on that. I’m just thinking now actually, you just reminded me it happened.” It was an experience like no other, a long eight hour day of filming at NBC Studios, Rockefeller Plaza, among the stars of the nightly cast and special guests. “When we did Fallon, it was performed live and taped in front of a live audience. We got to sit through the whole show, Ethan Hawke being interviewed! It was weird, seeing Questlove shuffling into his dressing room. We met Jimmy Fallon, he came into the dressing room and said hi to us all. He was jogging up and down after. It was a very bizarre experience.”

To follow up this incredible experience, Yard Act made their way to Coachella to take part in both weekends, including a mini tour in between dates which featured a stop by KEXP headquarters and their headline performance at Zebulon. Heading back to the UK after playing one of North America’s largest music festivals, Yard Act then found themselves playing Glastonbury, the UK’s largest music festival. It was a Spring/Summer of pure madness. “Glastonbury felt like nothing else I’ve ever witnessed because it’s so big,” says James. “Coachella is kind of tiny in comparison. I mean the site itself is quite small – I love the layout of Coachella, I loved the acts playing, I also loved that Coachella was two weekends, which is a weird but interesting thing. We got to hangout with some cool people at Coachella and spend some time relaxing there under different circumstances than Glastonbury. Coachcella was really efficient and beautiful to have attended as an artist. I think as a performer, Glastonbury was pretty lawless and a bit of a free-for-all. I loved them both.”

After finishing a run of sold out shows in the UK, Yard Act are returning to North America to hit a few new stops and a few old. “I am genuinely excited to get back out to the States and Canada,” James says. “We’ve played in Manchester quite a lot so it’s always a bit more exotic getting to go to particularly new places, specifically Vancouver, and visiting places like Seattle or LA that I loved and get to spend some more time there, that’s always important.”

Yard Act will be joined by New York’s own Gustaf, a band that they connected with earlier this year. “The first time the rest of the band saw them was at Sonic City festival in Kortrijk, Belgium, and the boys were raving about their set to me afterwards. We kept bumping into them at SXSW and their shows were always so great.” Gustaf, new signees to Canadian label Royal Mountain Records, have also been dominating 2022 with their high energy, unique live performances. “I genuinely believe Lydia is one of the greatest frontpeople of our times, and we will talk about her in the future the same way we talk about David Byrne or Patti Smith now. To be honest, I think we might have shot ourselves in the foot having a band that good open for us.”