The Montreal singer/rapper has always been a superstar, now he just has to prove it to the world.

For most emerging musicians, their first IRL performance in three years would be a rabid, anxiety-inducing affair. For Zach Zoya, giving his all to a sea of onlookers is just a simple exercise. When we sit down with the rising singer-songwriter and rapper, he’s just settled back into his Montreal apartment; a brief break between touring stints opening for singer-songwriter Charlotte Cardin. In conversation, he speaks as though doing four back-to-back sold out shows is no big deal. “It was a perfect practice for me to get back into the rhythm, the momentum of performing; and the crowd was sold out!” For Zoya, who has been relegated to performing to screens during some of the biggest moments of his career, hitting the stage for a true live experience was exhilarating. “The energy was overwhelming. So it was a gift, you know, just felt so good.”

While performing in private, Zoya has been quietly racking up accolades and cementing himself as one to watch in Quebec’s R&B/hip-hop scene, bringing an avalanche of festival appearances, brand partnerships and award recognition—all the trappings of a star-in-waiting. On his forthcoming EP, No Love is Ever Wasted, out June 10, he’s poised to continue his trajectory, earning fans and accolades throughout the rest of the world.

Zoya was raised in Rouyn-Noranda, a northwestern hamlet, home of the annual FME music festival, about seven hours drive from Montreal. Like many small-town Québécois, he was ushered into hockey. Music was a casual hobby between dreams of hitting the ice professionally. In high school, he roamed the halls with a notebook, penning lyrics and laying his first bars over ripped Kendrick Lamar-type beats that he would source on SoundCloud. “The gift of music just kind of fell upon me,” Zoya says of his early ambition. “It just kind of happened where I had this opportunity and people liked the music I made and so I just went full steam ahead and here we are.”

He posted his first efforts to YouTube with a hastily made PowerPoint cover, also made by him. “It was ‘Trying to Get it Done,’ and it was literally about trying to finish a song,” he reminisces. “I just kind of posted it on there, and people liked it.” To the then 17-year-old Zoya, 100 likes spelled success and a significant turning point.

“The gift of music just kind of fell upon me.”

Entering his final high school year, he faced a crucial choice: either stay in Rouyn-Noranda and attempt a career in hockey’s big leagues or double-down on trying to make it as a musician. In the end, he shoved hockey aside. “That kind of opened the door for me to become something other than an athlete, which I had been my whole teenagehood,” says Zoya. He eventually made the tough decision to give up hockey and move to Montreal to seriously pursue a music career.

Zoya says leaving his small town and embedding himself in Montreal’s rap scene fortified his new identity. “I left as Zachary, the athlete, the hockey player. I arrived as Zach Zoya, the rapper,” says Zoya. “So it was a big opportunity for me to kind of reinvent who I was.”

Leaving his hometown, ironically, brought him more local attention. His early efforts in Montreal landed him a spot on the Rouyn-Noranda based label 7iême Ciel, one of Québéc’s original rap labels. Despite French being his first language, Zoya makes music exclusively in English, making him the first Anglophone rapper on the label. When asked about his choice to make music in English, rather than his primary language, he asserts his case as a best-practice business decision. There simply weren’t any artists blazing a path for biracial, bilingual Québécois townies like Zoya. “I didn’t feel like I had enough exposure and enough resources. There wasn’t a scene for me to live in. So it really took me coming to Montreal to realize that there was a way in.”

In Montreal, he made his first real connections with rappers and producers in the same phase as him. His first EP, 2018’s Misstape, was a collaboration with platinum producer High Klassified. Zoya says his small town upbringing shaped who he is for the better. He sees the business of music from the outside looking in, rather than being mired in visible successes. “I think I really benefited from being outside of the big city growing up. It sets me apart now that I’m in Montreal. I think my mindset is a little different because I come from such a small place. So I take it as an advantage now.”

Growing up in a town of about 30,000 never limited his boundless imagination, he was always aware that there was more out there. “Somebody can live in New York and Toronto, in any big city and be like, ‘I’ve seen everything I need to see, everybody’s here.’ You fall for the illusion of thinking this is it. Coming from a small city, my assumption from the very start is there’s more out there.”

Looking back, Zoya describes his 2020 EP, Spectrum, his first widely released in partnership with Universal Music Canada, as a showcase of his flexibility. He stretches his range from party-ready bangers to reflective R&B croons, all anchored by his earworm choruses, guaranteed to stick in your head like glue. By contrast, Zoya says his latest work, No Love is Ever Wasted, brings forth a more unified concept. “I think [on Spectrum] I was trying to show people my catalog, ‘here’s my resume, here’s what I can do. Hey, look at how versatile I am.’ And now I think it’s more about catching the niche. And really going part by part, doing something more precise, more specific, and more intentful.”

Part of that intention includes relying on his melodic voice more than ever before. There’s also more orchestral inclusion, and he relies on the support of his band to supplant his eclectic taste. “Strangers in the House,” employs a groovy bassline and off-kilter, stuttering percussion, giving the sense that the song could veer into a bluesy freestyle jam at any point. Zoya’s voice climbs to new heights on the new records and, even though he says it’s more centred, there’s a tinge of adventure in his recent output. His forthcoming single, “Smoke & Dance” (out May 11), builds to a dance floor-filling chorus. It almost feels wrong to play the song through headphones, as if the sonorous, reverberating production demands a stadium audience, a couple drinks, and a summer afternoon to fully soak in the hurricane of synths and drum breaks.

Now with his star rising in Montreal and abroad, Zoya says it’s too soon to rest on his laurels. Although his Spotify stats are ticking upwards, it isn’t a complete tradeoff for the reality of engaging with fans the way he has been on his recent touring stops. “I don’t feel like I’ve accomplished enough to look back and be like ‘look at how far we’ve come.’ I still feel like I have something to prove.”

“Now that I’ve reached the very first award shows and I get my accolades here and there, it really doesn’t feel like we made it yet. Now I see the next step,” says Zoya. “Now I see the Grammys, now I see the Junos and I’m like, ‘I need that, I need that’ and I know I’ll get there and feel the same way… you know, ‘Ah, now I need to the number one and now, I need the 100 million in the bank account,’ grass always greener, man.”

For someone like Zoya, No Love is Ever Wasted becomes a credo. He likens the thought to a fractured relationship. A breakup doesn’t necessarily mean time wasted, right? “That applies to everything else in life; your hobbies, the little things you wanted to start doing, you kind of did and then you didn’t finish everything,” says Zoya. “That passion you had for a quick second is never lost, it inspired you in some type of way. You live with it, and that’s experience that you might use in the future. You never know how it’s going to become useful.” 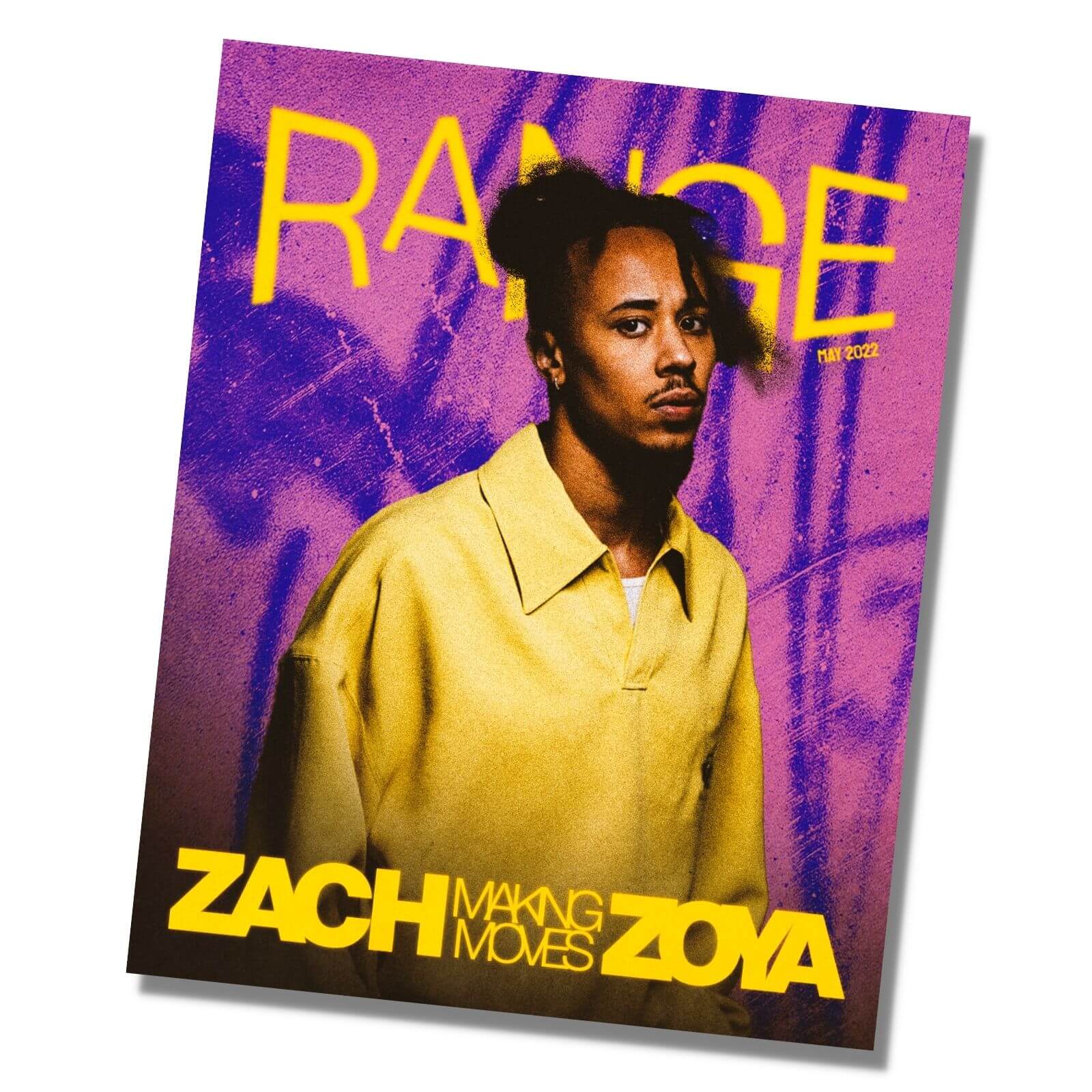