Movie trailers are an art form, but one trope that has been brutally beaten to death (like the guy Ryan Gosling kills in the Drive elevator scene) is using a slow version of a well known song for dramatic effect.

One of the earliest examples of this is a choral version of Radiohead’s “Creep” being used in The Social Network and it works incredibly well, making the trailer itself a thing of beauty. As with all creative ideas, it wasn’t long before other trailers started biting this idea like a bunch of horny vampires, and it’s everywhere now. Whether it’s “Smells Like Teen Spirit” in 2015’s The Gallows, “Say My Name” in 2020’s Candyman, or “Old Town Road” in Rambo: Last Blood, we won’t escape this. Don’t get me wrong, when it’s done right it works, but when it’s done poorly my eyes roll back so far in my head I can see the popcorn going down my throat.

And that brings us to our first trailer. In this column I dive into new movie and TV trailers that I think might be worth seeing. Are the movies good? I can’t make any promises, because I haven’t seen them. After all, this column is about TRAILERS.

The Batman franchise is back again with yet another reboot that seems to somehow be even darker than the last. Darker? This time Batman is trying to protect Gotham City from the Riddler and the Penguin, while fighting / falling in love with Catwoman. We’ve seen all these characters before but we always seem to want more (Or we want to finally see them done right). I mean Jim Carrey’s Riddler, when compared to this new version played by Paul Danno (There Will be Blood), seems like an annoying clown you regret hiring for a child’s birthday. And wouldn’t you know it, they use a slow version of an amazing and haunting song in the trailer. Nirvana’s “Something In The Way” actually works though because it’s used sparingly and reminds us of the tragedy of a young troubled musical talent we lost too soon. Also, have you seen the new Batmobile?!

Director Thyron Tommy takes us into the Toronto Jazz scene in this “musical meditation on grief and guilt” that is “seductive” and “surreal”. The story follows a talented sax player, Dezi, who meets a rising singer, Selma, and they fall into a romance that is anything but smooth. When Dezi experiences a major loss he quits playing jazz and also discovers an abscessed tooth. Personally, that’s my worst nightmare. A pocket of puss that can form in different parts of a tooth as a result of a bacterial infection? While dealing with the loss of a loved one? No thank you. This film is getting great reviews so if you’re into Jazz, smokey rooms, sexual tension, and mouth problems, get your tickets today.

The hilarious twisted minds that brought you Big Mouth have their first spin off! Human Resources plunges us nipples deep into the alternate world and work place that Big Mouth’s Hormone Monsters call home. All your favourites are here as the Hormone Monsters are joined by Shame Wizards, Love Bugs, Depression Kitties, Logic Rocks and many more. If you’re a fan of Maya Rudolph, Nick Kroll, Randall Park and Aidy Bryant you should already know about this show, and if you aren’t a fan of those people I just mentioned Where have you been? What are you doing with your life? Is everything okay?

You Are Not My Mother (Horror)

This Irish Folk Horror sees a Mother who’s gone missing, coming back home to her teenage daughter, but of course she just doesn’t seem to be the same person. The trailer alone has enough creeping tension, violin shrieks and unsettling visuals to make your skin crawl. I mean what’s scarier than the idea of your own mother not being who you think they are. Add her attempts to take you on a secluded trip “just the two of us” and your Grandmother telling you “That’s not your mother up there, and if we don’t do something we’ll never get her back” and you’ve got a rural cult finale in the making. Sign me up for a night light and rubber sheets cause I won’t be staying dry after watching this.

Staying on the mother daughter theme of our last film, but coming from a completely different angle, is Jane By Charlotte. Actor-singer Charlotte Gainsbourg’s documentary is an intimate portrait of her complex relationship with her mother, french singer, actress and model Jane Birken. Judging by the piano, which scores the trailer, the many one on one interviews, and poetic landscapes, this film is sure to be emotional. There’s nothing quite like soft female voices speaking in french while talking about love, regret and the struggles we all face with family, so I suggest you get a bottle of wine to sip on and a baguette to dab your tears.

This is your classic modern story of a twenty something girl looking for love on dating apps and having no luck, that is until she meets a handsome stranger at a grocery store. Too good to be true? Yeah, most likely. They fall into a passionate love affair and all seems right (At least thats what the sunrise lens flares tell us while they are laying in bed together) but then it all goes wrong and he’s into some fucked up shit. This trailer starts with the perfect example of one of the worst guys you could go on a date with, ramps up with Heads Will Roll by Yeah Yeah Yeah’s, and then hits us with a fast montage of blood, meat grinders, severed heads and more.

We have a mobster movie on our hands folks. When a soft spoken english gentlemen, in his 70s, hires a new young woman to work at his tailoring shop in the 1940s, she quickly realizes he uses his back room (where all the fine suits are crafted) as a drop point for all kinds of nefarious mob dealings. When she asks about the lock boxes and it being dangerous he says “if we only allowed angels to be customers, soon we would have no customers at all”…because angels are dead? Obviously soon after, things go off the rails when a psychotic man forces him to watch a  briefcase that the cops and all the local bad guys are looking for. After watching the trailer it looks like this whole movie takes place inside the suit store. I wonder how many vests and blazers were ruined in the making of this film.

RoboCop is one of those movies that is exactly what its title suggests. It’s a story about a cop who gets turned into a robot and becomes a robot-cop. Set in Detroit in the near future (this was made in 1984 keep in mind) the story follows cop Alex Murphy as he tries to take down a drug kingpin and weapons dealer who is destroying the community. Unfortunately they trap him in a warehouse and literally blow off his arms and legs, and then shoot him in the head. I would guess it’s one of the most brutal cop killing scenes in film history. But that’s not the last of Alex Murphy! His carcass is donated to science and he becomes ROBOCOP. In his cool new suit with a gun that hides in his leg, he takes down the men who tried to kill him and destroys the evil corporation that was behind creating him in the first place. You’re probably thinking that sounds dumb, but somehow it’s not and it still holds up as a great movie. He has a family so there is heart, a partner that cares about him so there’s drama, and some of the harshest deaths you’ll see including a guy who gets covered in acid and then hit by a speeding car while he’s melting. Wow. Just wow. 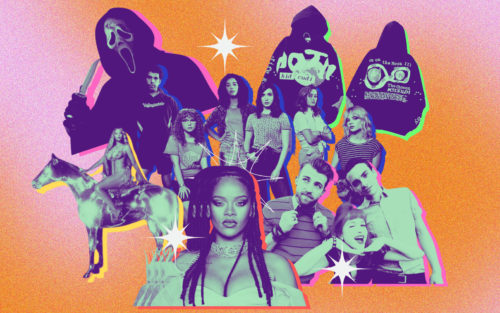 From Frank Ocean’s long awaited Coachella performance to the premiere of Yellowjackets Season 2 this year has plenty of movies, music, and television to keep you going.