Given it’s geographical location, Calgary isn’t the most attractive stop for touring musicians. The centrally-located Prairie city usually only gets national acknowledgement during the Calgary Stampede, but the annual Sled Island Music & Arts Festival has been a long-standing caveat to that.

Rain poured down for most of the weekend but it didn’t dampen the spirit of concertgoers looking for a good time. According to some consistent attendees, the rain has been a consistent threat throughout the festival’s history, with flooding completely shutting down the festival during the 2013 edition. Of course, 2020 and 2021’s editions were scaled down by the pandemic but 2022 saw the fest come back in full force.

Here are some of RANGE’s favourite acts and stand-out moments from this year’s edition.

I set up camp on the patio of Broken City where HomeSick played sweat-inducing breakbeats and footwork music. The venue was intimate, the BPM was high, and it turned out to be the perfect warm-up for Suzi Analogue’s raucous set at Commonwealth Bar. The Florida-based producer hyped the crowd through her echoing mic, stepping out from behind the decks to survey her kingdom of dancers directly.

Later on that night, a packed crowd moshed through perennial favourite Backxwash’s set as she ripped through headbanging hits from her albums and excused herself at one point for a true rockstar mid-set outfit change. For good measure too, as she ran into the crowd during the set, and again during an encore of “Devil in a Moshpit.” By the end of Backxwash’s set, my ears were ringing, my head was spinning, and I was elated by the first night of chaos.

On Thursday, I returned to Broken City for a stellar hip-hop showcase. Led off by the leather-clad Sinzere, her set fired up the crowd and brought all the dancers to the front. Sinzere is an engaging front person, threading in jokes and crowd work while sipping slowly between songs. It truly felt like she was performing to every single person in her audience.

Teon Gibbs followed up with an all-too short showcase of his excellent recent hits. He controlled the crowd with only the support of a DJ, coming off the stage to deliver his raps face-to-face with his audience. Never to be outdone, Montreal’s Maky Lavender followed up by acting as a one-man stage crew, fixing mics and cueing up his own setlist between rapping in French and English and grooving like his own hype train.

Friday took us to church, literally. First up was Mighloe at the Central United Church. Her vocal tone floated through the grand cathedral, enhancing what was already a very captivating voice. Next up, Grouper took over the pulpit with her sonorous compositions. It turns out a dimly-lit church is the perfect setting for the meditative ambient music and fuzzed-out guitars.

By the evening, it was time for something a bit heavier so I made my way to Dickens for SASAMI. The unruly guitar shredding paired with Sasami’s sudden screeches and the sticky-floored dungeon-like vibes of the venue drew to mind the Zion rave from the Matrix films.

I closed the evening with Joyce Manor at The Legion. The Torrance natives shredded through hits from their five-album catalog. At times, the mosh pit drowned out the sound of the voices on stage. Between a constant stream of crowd surfers, trading beers for setlists, and inviting fans to sing onstage, this was an absolute frenzy of a set.

I took a break from festival programming to visit the mecca of Canadian music, the National Music Centre. The Centre is half-museum, half-activity centre, with a production studio, and exhibits assessing the impact of music on mental health. I had a great time in the Making Music section, where I tried my hand at the rockstar life by recording in the vocal booth, designing my own Nudie suit and pretending to be Butch Vig at the mixing booth.

My favourite attraction was Bodyphonic, which creates tones with your body movements using visual sensors. Standing in the centre of the floor and making tai chi motions resulted in a Music for Airplanes-esque composition. 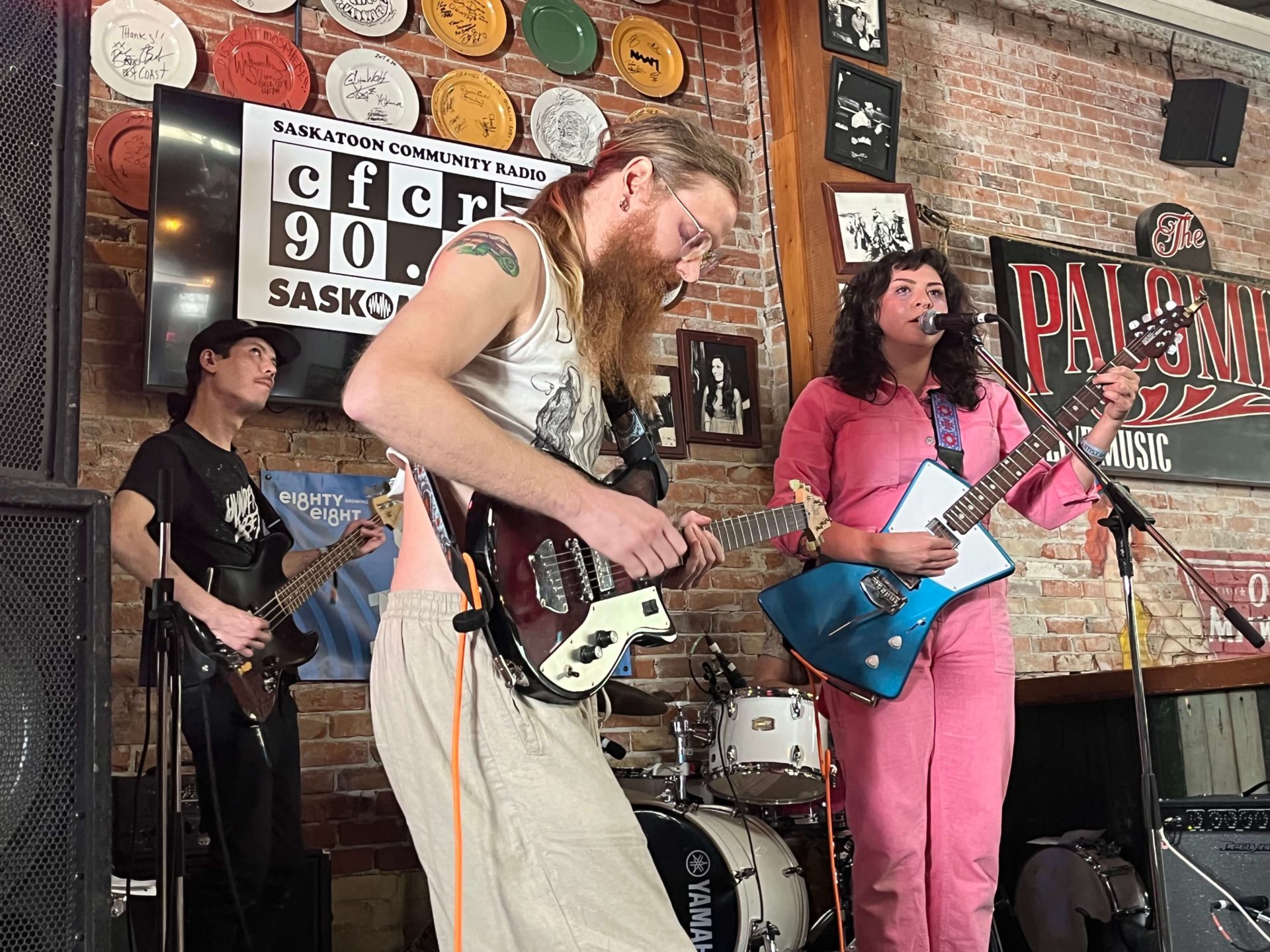 Later that afternoon at the Palomino Smokehouse — an equally amazing BBQ restaurant as it is a live music venue — SaskMusic was hosting a provincial showcase. Proving you can’t always judge a band by their name, Dump Babes were an absolute highlight. Featuring Skyler Cafferata from punk rock duo Grimelda FKA The Faps on guitar and fronted by the powerful vocals of Aurora Wolfe, the quartet played a smooth blend of danceable Detroit-influenced rock and soul that was only heightened by a rowdy cover of Danzig’s “Mother,” proving who Saskatchewan’s true Misfits are.

Later that evening, I closed out my Sled Island experience at guest curator Sudan Archives (pictured at the top). She brought down the Legion with her amorphous blend of R&B, folk and fiddle-work. As this closer was two years in the making (Sudan Archives was scheduled as the curator in 2020) one could sense the catharsis flowing through the music. This was a brilliant wrap up to an already stellar week of performances.