Desert Daze is a gathering unlike any other. Just one hour east of Los Angeles at the Lake Perris State Recreation Area, the three-day music and arts festival celebrated its 10th anniversary this year. A home away from home for many, Desert Daze prides itself on their safe space community of like-minded individuals; those who share the same love of music and free-spirited, open-minded thinking.

This year’s headliners included King Gizzard & the Lizard Wizard (pictured above), Tame Impala, and Beach House. Sadly, Iggy Pop dropped off the bill due to visa issues with his touring band but the eclectic mix of established and emerging artists offered more than enough punk rock spirit to fill the void.

On top of the festival’s incredible selection of music, attendees were also able to take place in modular sound baths and yoga classes, Hamilton Morris’ Q&A, Global Inheritance – Meat The Beetles dining experience, as well as hiking, swimming, and exploring the festival’s local market place. For those who chose to camp, Thursday night saw a special night of extra music from the festival’s welcoming committee, along with Sunday night’s closing ceremonies hosted by JJUUJJUU and friends.

Moreno Beach and Lake Perris is a true thing of beauty. Waking up in the hillside, overlooking the tents and camping grounds, a slight mist glazed across the tops of the desert mountain side each morning. As the sun rises over the scenic craggy mountains and crystal-clear lake, it almost feels like a dream.

The list of acts we saw is outstanding and we have the receipts to prove it. Here is our re-cap of Desert Daze as told through a series of Polaroids.

Molly Lewis, the LA-based, Australian-bred, angelic and preeminent whistler wowed The Sanctuary stage. Her beauty and undeniable cinematic whistle-akin had everyone lost for words, the crowd quietly sitting and listening to her South Pacific lounge style of late-1950s exotica sounding music. At the end of each song, Lewis was met with a roaring applause. 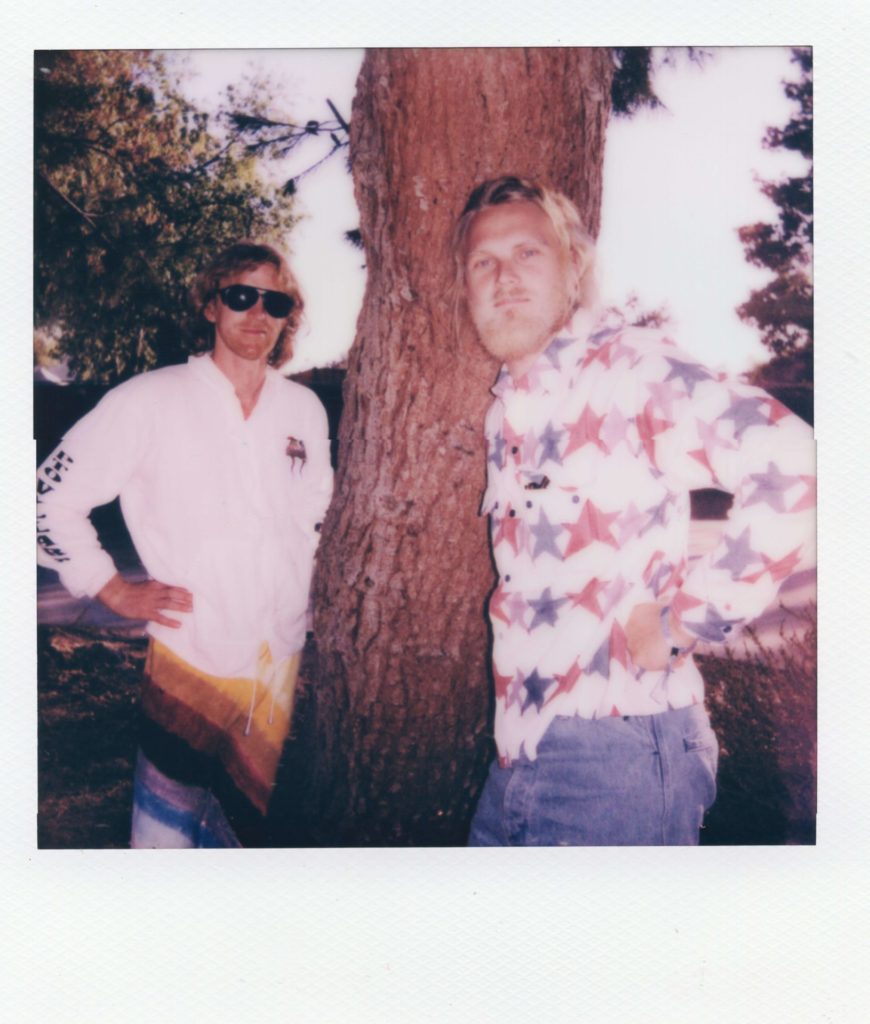 Babe Rainbow took over The Block stage with the lights dimmed, using only Lance Gordon’s Mad Alchemy Liquid Light Show to light the stage. It was the first time you couldn’t see their beautiful hippy attire but their funky dance moves sure gave us a taste of their nostalgic and retro jivin’ look. Their set was an endless boogie, spirited and colorful, giving us a taste of old tunes and new. 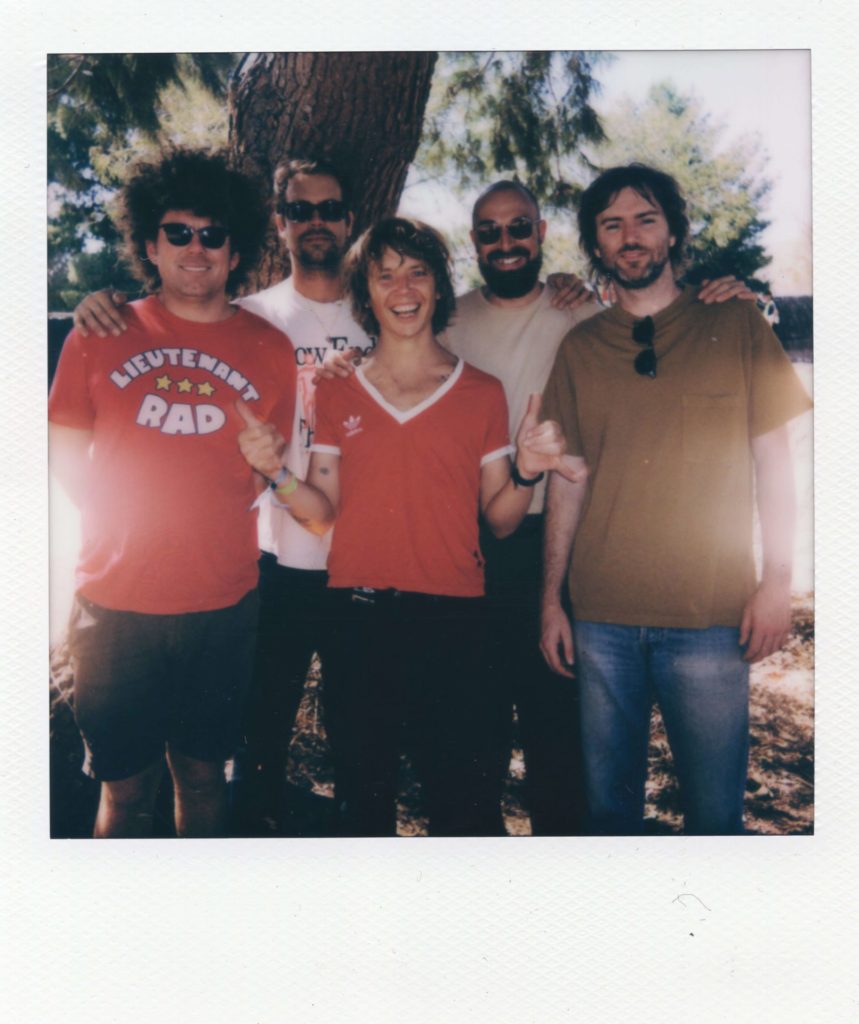 POND emerged as one of the final performances of the weekend. While Sunday has us slowing down and reeling in the final moments of the weekend, POND were able to bring the party back to life. It was both nostalgic and energizing; fans notability singing along to every song. The band’s hour-long plus set was drenched in synth-psych rock and fuzzed out spacey guitar riffs, and featured Nic Allbrook boppin the night away. After using Sunday as a recovery day, POND were the perfect pick-me-up to battle out the final hours of Desert Daze.

For those familiar with Babe Rainbow, Tame Impala, POND, or GUM, you will have seen the work of film director Kristofski. Working on the craft for more than a decade, Krisofski has become a paramount member of the music community for his nostalgic and other worldly cinematic creations. And as many of his friends were in appearance at this year’s Desert Daze celebrations, it was only natural to find Kristofski walking the grounds. 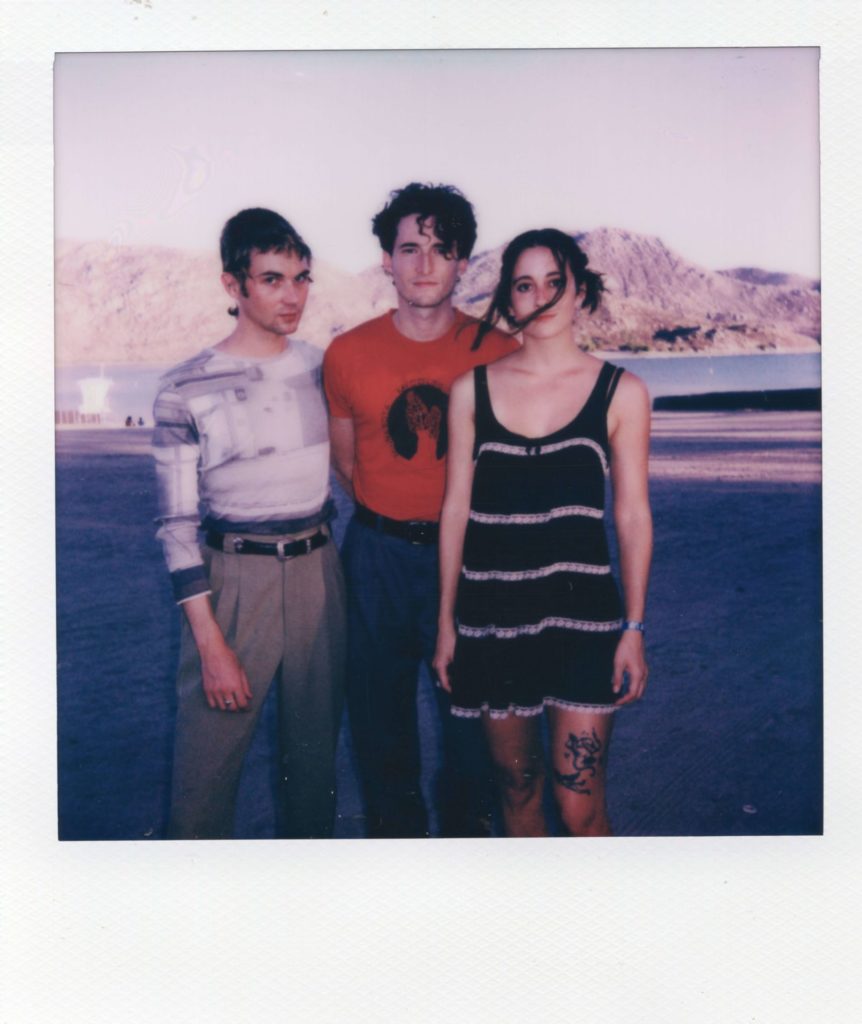 Nation of Language dance moves are just as angelic as their music. Their revolutionary modern take on their ‘80s new wave influences can be felt not just in their music but within the stage presence and without crossing that fine line of obvious duplication of the greats. Frontman Ian Devaney uses the entire stage to deliver a brilliant performance through his vocals, dance moves, and pure passion for his craft. Aidan Noell and Alex Mackay in-sync toe tapping and divine movements really emphasizes their clear love and devotion to their music. It’s a breathtaking performance. 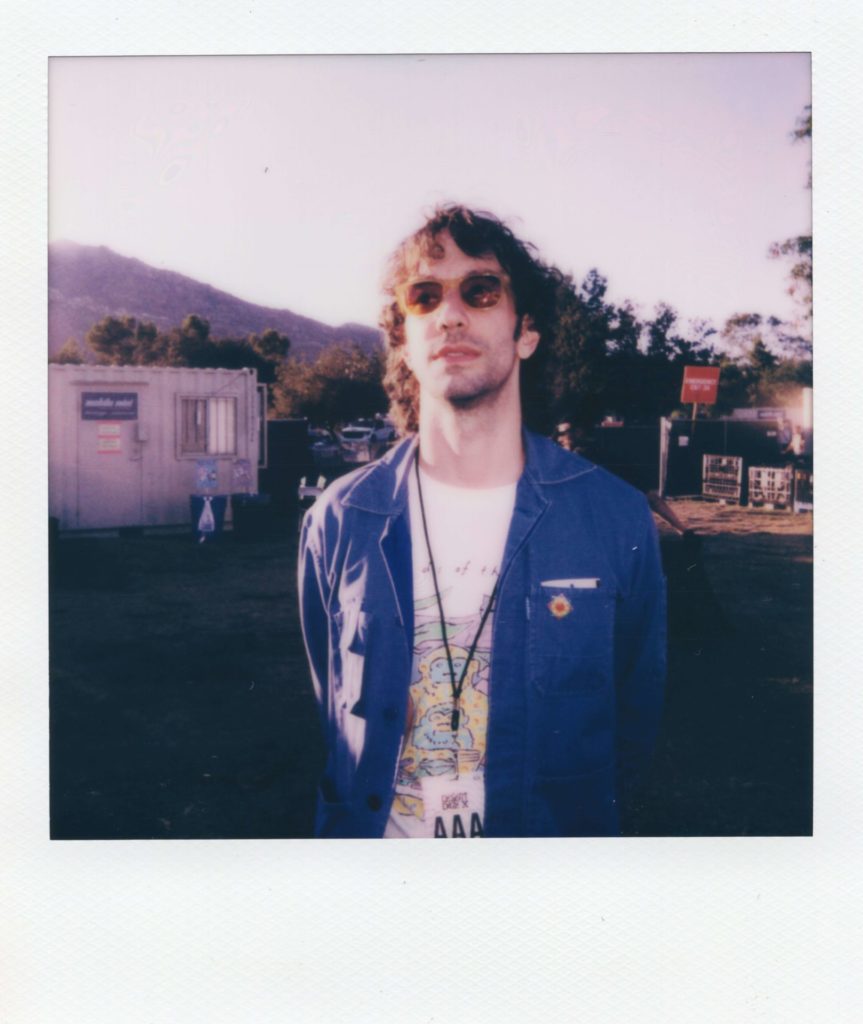 To celebrate and introduce his ultra-premium wine seltzer JETWAY, Albert Hammond Jr. made a guest appearance at Desert Daze 2022. For those who managed to stop by JETWAY’s booth, Hammond Jr. himself handed out and poured samples of his new alcoholic beverage venture. Albert’s kind nature is enchanting, his smile alone sells it all! 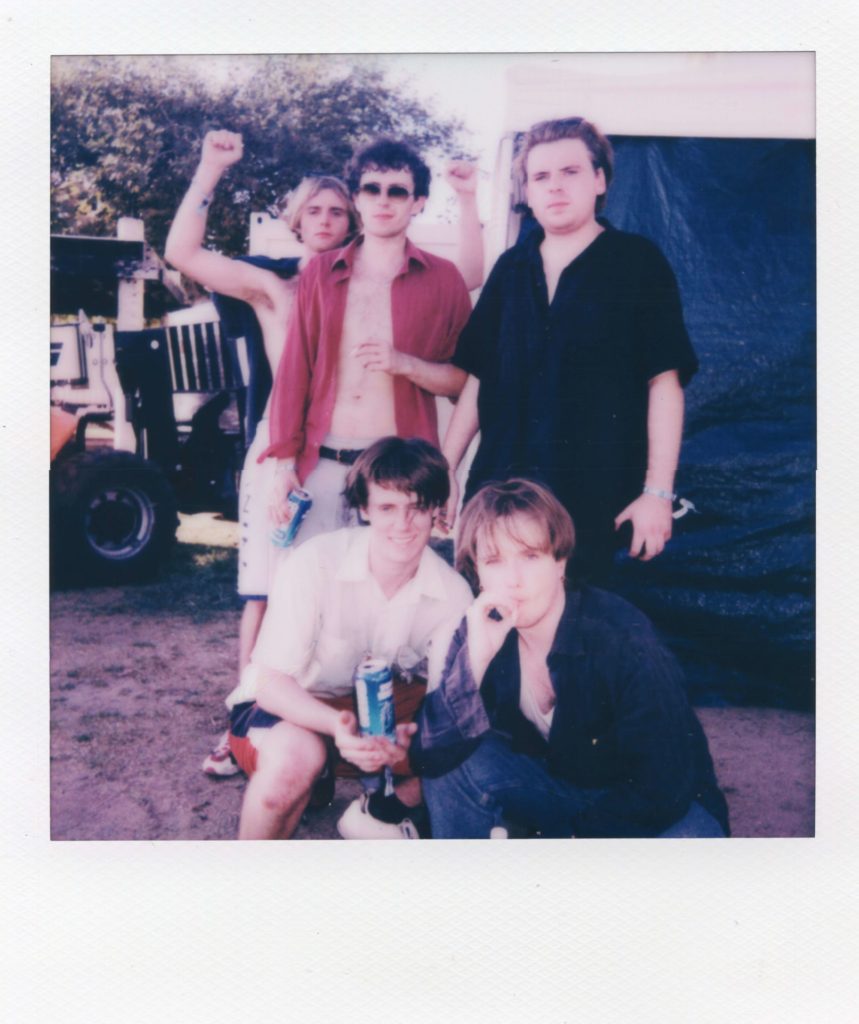 London brits Shame took control of the Moon Block (main) stage with their passionate and thundering performance. Charlie Steen (lead vocals) is a born performer, leading the way of each song with his dominant stage persona. The rest of the band — Eddie (guitar), Sean (guitar), Charlie (drums), and Josh (bass) — are a force unto themselves with a textured wall of sound that channels each of their individual chaotic energies. Even in the desert sun and heat, the vibrancy of the audience was undeniably awoken during their outstanding performance. 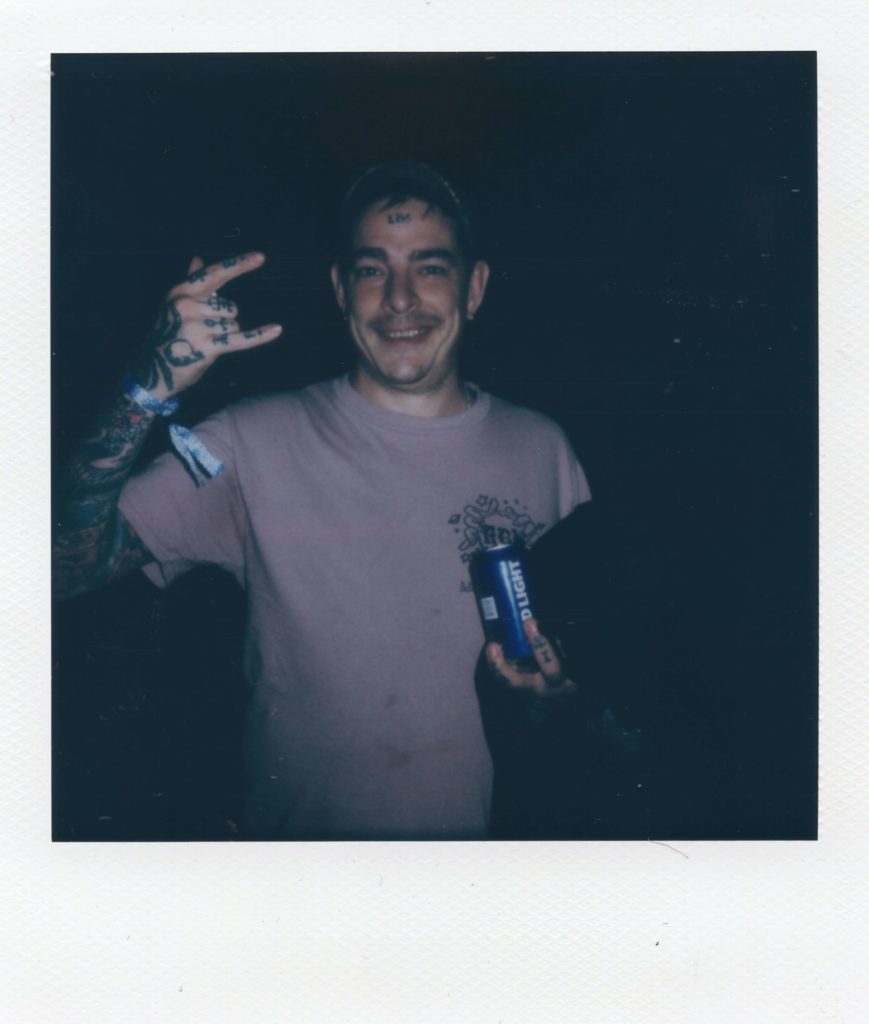 You could feel Swedish post-punk rockers Viagra Boys presence on the Moon Block (main) stage from miles away. Sebastian Murphy’s (lead vocals) mesmerizing charm illuminates the stage, his antics of that of a drunk uncle stumbling about at a wedding reception. Each band member feels like a very unique and different character, it’s hard to choose your favorite to watch; from Oskar’s (saxophone) Shakira hips to Benke’s (Bass) cold head-banging stare to Elias’ (keyboards) dance moves, you almost feel like the each represent a different part of your personality.

LA-based retro-futurist motorik pop band Automatic bring the emphasis on minimalistic driven music. Their synth-experimentation and eerie monotone vocals resonated with that of a 1990s band re-envisioned in 2049. Their natural ability to create such a nostalgic sound comes as no surprise, given one of them is the daughter of Kevin Haskins of Bauhaus. Their set was absolutely diverse in sound, flowing through psychedelia and cloudy synthesizers. Their riff in the wave of the indie music scene is undeniable, and their live show proves they are a powerful force.

Desert Daze is one of the most unique music festival experiences in North America. The event treaded on the early days of Woodstock; peace, love, and happiness, with a combination of psychedelic/garage rock music and just a hint of hardcore — the perfect combination for a weekend in the desert.