For the last 16 years M For Montreal has made it their mission to show the rest of the world first-hand why Montreal is a world class hub for arts and culture. And for their 17th edition, the four-day festival/conference hybrid raised the stakes once again with a concentrated effort to make the entire city of music lovers feel included in the action through their MARATHON programming. From Nov. 16 to 19 at multiple venues around Montreal, more than 100 artists performed for music fans and international music industry delegates alike.

Everyone from music publishers, managers, supervisors, publicists, promoters, and even super cool members of the media (cough*cough) descended on the city to experience a wide variety of music programming. With more panels, breakout sessions, showcases, and afterparties than any one person could reasonably handle, participants were able to experience first-hand what makes Montreal so damn cool while also discussing important topics affecting everyone in the music industry worldwide.

Starting off in a decidedly thoughtful way, delegates were invited to participate in a roundtable discussion about mental health. “It’s hard and it sucks but we also have the best job in the world,” Royal Mountain Records CEO Menno Versteeg said to a full room of delegates during the session, acknowledging that the thankless slog of keeping things moving from within can weigh heavy on even the most stable artists. From rigorous touring schedules to maintaining a “healthy” social media presence, there are a lot of pressures put on artists and the music industry is yet to catch up to the sports world when it comes to treating musicians with the same level of compassion as athletes. There are however record labels like Royal Mountain who are leading the charge by actively building mental health budgets into each of their artist’s album cycles, offering modest honorariums for musicians to put toward anything they feel will improve their mental state.

Later that afternoon, delegates were invited to a bowling alley in the city’s east end where everyone was treated to performances by Lisa Leblanc, Marilyn Leonard, and Thaïs. It was a surreal but a welcome spectacle that was only made better by a smorgasbord of greasy smoked meat sandwiches — a Montreal staple! If you haven’t been to the city before, a visit to Schwartz’s Deli on St. Laurent is a right of passage. Just be prepared to wait at least an hour in a lineup.

Over the course of the festival’s four days we tried to see as many artists and panels as we could without burning out — after all, mental health was top of mind. These are the highlights of our time on the ground.

It seems nowadays with the current musical climate giving rise to artists like Billie Eilish and Olivia Rodrigo that a record label isn’t complete without a budding pop clone, but Dee Holt (stylized dee holt) isn’t just Nettwerk Records’ answer to the the latest craze; this 18-year-old talent has enough charisma and personality to make her a star all unto herself. In less than a year, the Montreal-based alt-pop singer has amassed millions of streams on singles alone. Sticking to the hits, Holt and her band effortlessly broke into her impossibly catchy track “Picture,” followed by a heartfelt acoustic number, and her most recent single, “Sober,” making it clear that she’s got an intoxicating ride ahead of her. Did we mention this was her first live performance??

We fell in love with Fernie last summer when we premiered his music video for “New Beginnings,” a groovy R&B track promoting self-love and the idea that it’s cool to think and live outside the box. This is exactly the trajectory the rising star has been on ever since, and his performance at Le Belmont during M For Montreal felt like watching all of his hard work pop like a bottle of champagne on New Years Eve. His emotive voice and charismatic stage presence was enough to give us chills that left the hair on our arms standing up. There was also a lot of talk about a special guest joining Fernie that evening, but when none other than Patrick Watson walked on stage and sat behind the piano to accompany him on his brand new yet-to-be-titled single, the entire set instantly became something unforgettable and anyone who was lucky enough to be there knew it.

Come As You Are: Keynote With Sub Pop Records

A rare opportunity to hear the voice behind an iconic and celebrated record label, delegates were treated to an exclusive panel wherein Sub Pop’s CEO, Megan Jasper, was interviewed by KEXP’s revered on-air personality, Cheryl Waters. The hour-long keynote played out like a podcast, offering a conversational peak into the history of Sub Pop and how Jasper grew into her position from stuffing envelopes in her twenties to running the company today alongside its two founders, Bruce Pavitt and Jonathan Poneman. Fuelled by the obvious friendship that the two Seattle-based colleagues had, Waters’ line of questioning was insightful and compassionate as she walked the audience through topics such as how the label has shifted its focus to align with its growth and how they have navigated things such as equal representation and ageism within the industry. Jasper came up with the Sub Pop greats including Dinosaur Jr, Mudhoney, and Nirvana but the label has evolved to be so much more than a beacon of Seattle’s grunge past, and to hear the companies’ ethos spelled out by someone on the inside like Jasper was inspirational to say the least.

The Calgary psych pop luminaries looked right at home on stage at Cafe Cleopatra, the famed live music venue that lives atop one of the city’s oldest strip clubs. Their comfort was probably due in part to the fact that their record label is the Montreal-based Mothland, an indie label that has been picking up speed with each release and expanding their reach far beyond the walls of Quebec, which has the tendency to be quite insular in nature. Sunny Gs put out an album earlier this year called Subterranea and it’s their best work yet, surpassed only by the two new songs that they worked into their set. Proving they are on an upward trajectory with a banging light show and stage presence to match their dark and brooding under currents, this band is definitely one to keep an eye on in 2023 because, as we noted in our recent interview with them — their future is bright.

This past year, it’s been almost impossible to turn on Top 40 radio anywhere in Canada without hearing Zach Zoya and Soran’s impossibly catchy smash hit, “Under Hand.” You know the one, but if you don’t, just don’t say we didn’t warn you that its catchy chorus will be stuck in your head for the next “1-2-3-4” days. Performing as part of the RANGE co-presented showcase alongside Clay & Friends at Club Soda, Soran opened the show and radiated infectious energy as he and his band soared through their set of show-stopping singles. Best buds in music and beyond, Soran would later come out to join Zach Zoya for their aforementioned hit and the sold-out crowd was there for all of it. We’ve been big fans of Zoya from day one and seeing the two perform together was something special, reminding all of the delegates in attendance that Montreal doesn’t just export good talent, it’s also an incubator for collaboration.

After the festival was forced to cancel their ambitious outdoor show that was originally scheduled to be at the Van Horne Skatepark due to cold weather concerns, they moved all of the displaced artists wherever they could fit them. Barry Paquin Roberge didn’t take long to get their groove back when they plugged in at L’Escogriffe, one of the best dive bars in Montreal. While its lack of sightlines leave something to be desired when it tries to double as a live music venue, BPR thankfully didn’t need to be entirely seen to be believed. Their disco infused licks and colourful stage presence had the sold-out audience desperately looking for a place to drop their winter jackets so that they could dance along to the band’s infectious grooves. A welcomed change in pace from the artists we had seen up to this point, BPR sound like a modern day Bee Gees with just the right amount of kitsch. If you’re looking to inject some Saturday Night Fever into your next party, we highly suggest you check out their new album, Exordium to Extasy.

In case you haven’t been paying attention, Mothland are cultural curators based in Montreal who have been spreading their wings to bring their highly curated roster of artists to the rest of the world. Self described as “more than a booking agency and a label — Mothland is an extra-dimensional space.” The space they were taking up during M For Montreal was La Sala Rossa, one of several historic venues in Montreal’s Mile End, for their M For Mothland showcase. This was the label, sorry booking agency, sorry extra-dimensional space’s chance to show off all the cool artists they’ve been working with, including psychedelic visual artist Anthony Piazza and his next-level projections that accompanied each set. Over the course of the night, bands including Crasher, Absolutely Free, Gloin and Grim Streaker would perform, but it was Montreal’s own PRIORS who would take centre stage – literally set up on the floor in the middle of the room – to show delegates and music fans alike that punk rock was still alive and well in Montreal. It didn’t take long for singer Chance Hutchison to be shirtless and covered in sweat as he led his band through a clever and tightly wound set of rippers, including their most recent single, “Newnewnew” from their new EP of the same name. At one point during their set, someone tried to hand Hutchison a full glass of beer — ”I’m sober,” he quickly retorted before the band broke into another song. Proof that you don’t need to drink to be a maniac on-stage, PRIORS are setting an excellent example for a new era of punk rock.

Thank you to M For Montreal for having us this year. (L-R: Marie Desjardins, Sandrine Desrosiers-Champoux, Alexandra Idiart-Benavides, Mikey Rishwain Bernard, and Sebastien Nasra) 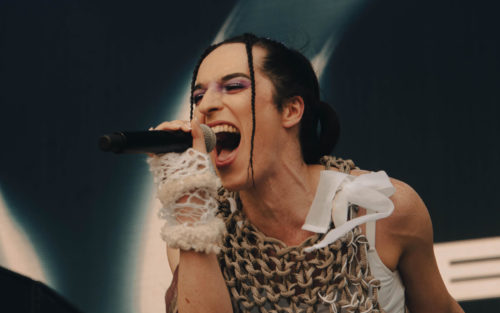 Ceréna Is Inviting Everyone To Her Party

We catch up with the queen of Canadian queer dance music fresh off her first-ever festival set.